The Curious Case of the Disappeared NASA Graph

From Ponder the Maunder (website of remarkable teen Kristen Byrnes), comes The Curious Case of the Disappeared NASA Graph: 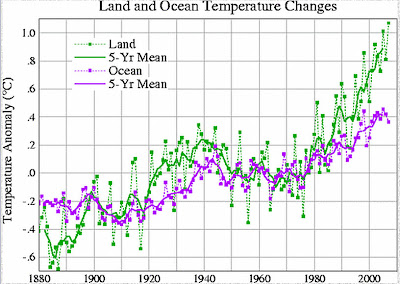 "The graph [above] was a part of James Hansen's surface temperature analysis for many years. It was continuously updated like the many other graphs on the NASA GISS site. It shows land temperatures warming much faster than ocean temperatures. The graph disappeared from the NASA GISS website without an explanation following the widely publicized Climategate email below:"

From: Tom Wigley
To: Phil Jones
Subject: LAND vs OCEAN
Date: Fri, 06 Nov 2009 17:36:15 -0700
We probably need to say more about this. Land warming since 1980 has been twice the ocean warming -- and skeptics might claim that this proves that urban warming is real and important.
Kristen's "emails to NASA GISS asking for an explanation of why the graph disappeared have gone unanswered".
Despite the title, it's no Sherlock Holmes mystery and is solved in a single paragraph.  As shown by Dr. Roy Spencer, Anthony Watts, Joe D'Aleo, et al, much of the claimed global warming of the latter 20th century may simply be an artifact of poorly-sited thermometers near urban and localized man-made heat sources including airports, air conditioners, asphalt, urban areas (so-called Urban Heat Islands), which can artifically raise nearby surface temperatures 8ºC or more. (For additional background on this issue, please visit Anthony Watt's sister site surfacestations.org (Kristen was a major contributor to this volunteer effort also!) and read this report). The global ocean temperature record is obviously not subject to Urban Heat Island bias, and therefore represents a more objective assessment of global temperature trends, not to mention the oceans cover 71% of the earth's surface and hold over 99.5% of the earth's heat. The climategate email above says the dreaded skeptics {why not objective scientists seeking the truth?} might claim this now-disappeared graph proves that urban warming is real and important. That's exactly what it "proves", that the land-based thermometer record is biased due to siting problems, which has resulted in a doubling (tripling by my calculation using 5 yr. mean) of the actual global warming since 1980, and that this is real and important. However, upward urban heat island bias is by design of the Climategate crew as illustrated by this smoking gun email between Chieftains Phil Jones and Hansen & Co. indicating their desire to upward bias the land-based thermometer record by preferential siting of thermometers in urban areas and airports, and to adjust the ocean based temperatures as well because they seemed too cool. The apparently less biased ocean temperature trend also illustrates how poor the NASA/GISS/IPCC models are, since the IPCC climate computer predicts the temperature change due to the CO2 increase since 1900 should be 1.5ºC (assuming the imaginary positive feedbacks) whereas the actual ocean temperature change was ~0.6ºC (almost 3 times less) and the upward biased land temperature change ~1.1ºC.

Related: Kristen also does a fine job of refuting the NOAA response to the surfacestations.org findings
Related: Hansen claims Urban Heat Island effect only 0.06C
Posted by MS at 8:08 AM