The UK Meteorological Office chief scientist Julia Slingo proclaimed yesterday "all the evidence suggests that climate change has a role to play" in the current precipitation and floods in SW England, and that "There is no evidence to counter the basic premise that a warmer world will lead to more intense daily and hourly rain events."

These are blatantly false statements countered by over 200 peer-reviewed published studies demonstrating that global warming decreases extreme precipitation and flooding. Slingo's claims are based highly flawed climate models, which even the IPCC admits cannot be used to support such claims. Slingo's MET Office report claims Britian's storms are "consistent with global warming," weasel words to defend a theory which is always said to be "consistent" with any weather event including warming, cooling, snow, droughts, and floods.

Excerpts below of Slingo's statements from the BBC and Bishop Hill, followed by links to several published papers demonstrating that global cooling leads to more frequent and extreme flooding, rather than global warming which climate alarmists claim is the culprit. Also included below are several papers finding decreased solar activity is linked to increased precipitation and flooding. Continue reading the main story
Climate change is likely to be a factor in the extreme weather that has hit much of the UK in recent months, the Met Office's chief scientist has said.

Dame Julia Slingo said the variable UK climate meant there was "no definitive answer" to what caused the storms.

“In a nutshell, while there is no definitive answer for the current weather patterns that we have seen, all the evidence suggests that climate change has a role to play in it,” Dame Julia said.The “clustering and persistence” of storms that have hit the UK was extremely unusual, she added. “We have seen exceptional weather. It is consistent with what we might expect from climate change.”

"But all the evidence suggests there is a link to climate change," she added.

"There is no evidence to counter the basic premise that a warmer world will lead to more intense daily and hourly rain events."


Julia Slingo on the storms


The Met Office and the Centre for Ecology and Hydrology (CEH) - a government research centre - have issued a joint report into the storms in south-west England. To mark the occasion Julia Slingo has taken to the airwaves, trying desperately to insinuate that there is a link to climate change:

Dame Julia said while none of the individual storms had been exceptional, the "clustering and persistence" were extremely unusual.


"We have seen exceptional weather," she said.


"We cannot say it's unprecedented, but it is certainly exceptional.


"Is it consistent with what we might expect from climate change?


"As yet there can be no definitive answer on the particular events that we have seen this winter, but if we look at the broader base of evidence then we see things that support the premise that climate change has been making a contribution."


Event: Julia Slingo on the weather: "what was that little bit extra that climate change has added...?"

Julia Slingo: Well, what we're saying very clearly is that, first of all, we understand the root causes of our very extreme run of weather - very prolonged unsettled weather, very, very wet - the wettest we've seen since 1766 in the southern part of the UK. We're saying that they - although we can understand it from the natural variability of the climate system, the extreme nature of the impacts, and indeed of the rainfall and the storminess, could be a manifestation of climate change. And we discuss that in some detail, in a very complete report that we've published today on our website, and it's available for the public to read.

Shaun Ley: The government always says it must rely on scientists, when it deals with issues of climate change. You, as a scientist, seem to be pointing the way towards more vigorous action by our government in Britain, and by governments around the world, to tackle climate change.

Julia Slingo: Yes, I think that's right. I think those of us who've worked in climate science, as I have for my whole career, we understand the fundamental physics that underpins climate change. We're looking now at what the records around the world are telling us - they're very clear, it's what the IPCC has published last year. And we're looking at a situation where: yes, the world is warming, we know that warmer air holds more water, we're beginning to detect an increase in intensity of daily and hourly rainfall rates, over the UK. We're looking at ongoing sea-level rise, a manifestation, of course, of global warming. And there are now some studies emerging that suggest that storminess is increasing, if we look at the long-term trends over the last century or so.


Shaun Ley: You seem to be saying that climate change deniers are simply wrong, and it's now time for governments to be much more robust - we're in danger of missing carbon emission targets, and really we've got to put on a much stronger act.

Julia Slingo: That's right. I mean, I think as scientists we always go back to the evidence base, and the report we've published is very clear about the evidence. I always challenge the climate sceptics to provide me with the same level of scientific integrity of the evidence base - I can't see it, and nobody has come forward to counter, as I say, the basic premise that if you have a warmer world, you are going to get more intense heavy rain rates on the daily/hourly time scale, as we're beginning to detect now, over the UK.

Julia Slingo: I'm not saying that entirely, because I think until we have done the definitive study on the contribution of global warming to this winter's extreme weather, we have to be very careful on statements as strong as that. Extreme weather is part of the natural cycle of weather and climate - that's very clear. What we need to understand now is how much global warming is adding to the extreme weather events that we see - and have always seen, I mean, we have always seen damaging weather in the UK. The question is: what was that little bit extra that climate change has added to it already? And how will climate change continue to add to extreme weather, as we go forward over the next few decades?

Shaun Ley: The Prime Minister, David Cameron, came to government pledging to be a "green" party. Are you disappointed? There seems to have been some sort of retreat from that, particularly under the pressure of austerity and recession.

Julia Slingo: It's not my place to comment. It's my job, as Chief Scientist of the Met Office, to give the government the best possible scientific evidence on which they can then make their decisions. And that's our job - we continue to work extremely hard to make sure that the science that we do is at the highest integrity, that we report it openly and transparently in the peer-reviewed science literature, and that is basically the way in which we've put together the report that was published today. It's a scientific report, it's the evidence base - I think, you know, the government then has to make its judgement on the best way to shape its policies, based on that evidence.


Rebuttal to Slingo's challenge to the climate skeptics "to provide me with the same level of scientific integrity of the evidence base - I can't see it, and nobody has come forward to counter...":

IPCC:
“There is limited to medium evidence available to assess climate-driven observed changes in the magnitude and frequency of floods at regional scales because the available instrumental records of floods at gauge stations are limited in space and time, and because of confounding effects of changes in land use and engineering. Furthermore, there is low agreement in this evidence, and thus overall low confidence at the global scale regarding even the sign of these changes.”

Testimony of Dr. John Christy at House Subcommittee on Energy and Power Hearing

New paper shows no increase in precipitation over past 105 years, counter to global warming theory 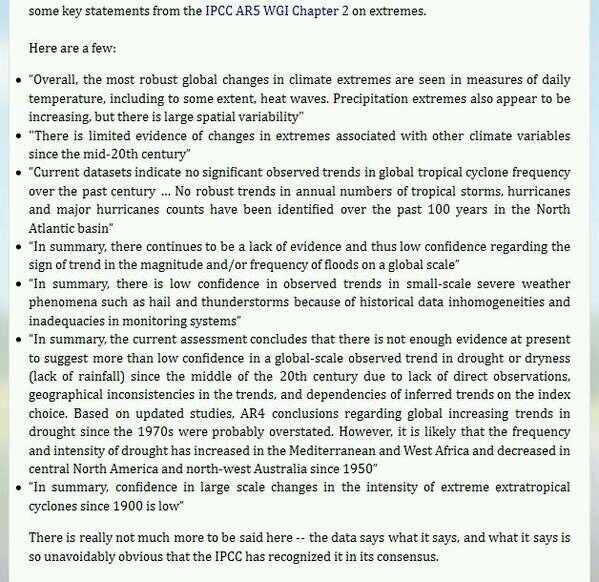 Met Office blames global warming for floods. But then it also predicted below average precipitation for this winter. [@afneil on Twitter]
Posted by MS at 10:48 AM