In a comment on the Kiwi Thinker post yesterday, Bill Illis debunks the warmist's claim that "90% of the 'missing heat' allegedly trapped by greenhouse gases has gone into the oceans. Bill shows the numbers simply do not add up, 86% of the "missing" energy is still missing and has left to space, or is still hiding somewhere outside of the oceans and atmosphere [highly unlikely].

In addition, for multiple physical reasons, IR radiation from greenhouse gases cannot heat the oceans, due to a penetration depth of only a few millionths of one meter, which causes evaporative cooling of the ocean "skin" surface, not warming. Also, decreasing the temperature gradient between the ocean and atmosphere by a doubling of CO2 levels could only warm the oceans by 0.002C at most. And since there has been ~zero warming of the atmosphere for the past 16-26 years, there has been zero change in the ocean-atmosphere temperature gradient over that period.

Therefore, we can effectively show no significant anthropogenic warming has gone into the oceans over the past 16-26 years due to no change in the gradient, that the ocean temperature changes have been related to solar (mediated by clouds and other potential amplification mechanisms), and to natural ocean oscillations, but not to increases in man-made CO2.


Bill Illis says:
October 29, 2014 at 2:36 pm
Skeptical Science tells you that 90% of the warming went into the oceans. That is, of the heat remaining in the system, 90% went into the oceans.
But they really left out the percentage that has merely been emitted back to space and/or is simply missing.
The IPCC says that the net forcing is +2.30 W/m2 right now. On top of that, there should have been water vapor and cloud feedbacks for another +1.75 W/m2.
But all that is showing up is 0.535 W/m2. 86% of the energy is no longer here or is missing.

http://s13.postimg.org/turztazs7/Missing_Energy_Increase_OLR.png
The latest numbers from CERES shows that there is no change in Net Radiation since the year 2000, almost 14 years now. 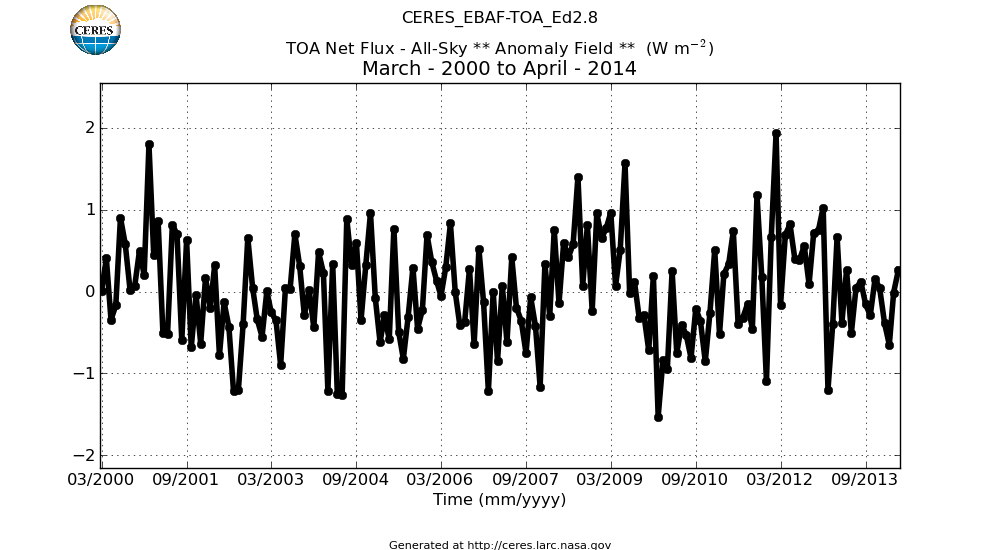