AGW believers refuse to admit the 'missing' heat was lost to space, claim it sank to bottom of ocean

The Mann-made global warming true believers continue their daily crusade to convince us that the 'missing' global warming has sunk to the bottom of the ocean, undetected by observations, instead of admitting the observations show the missing heat has been lost to space.

Satellite and radiosonde observations show outgoing infrared radiation to space has increased over the past 62 years, the opposite of AGW model predictions of "heat trapping" by greenhouse gases causing a decrease of outgoing radiation.

You have to pinch yourself to see if you are awake when you read the lengths believers in man made global warming (AGW) go to avoid accepting evidence against their belief.

Matthew England is an academic and fervent believer in AGW. He has written a new paper which supposedly shows that increasing trade winds are responsible for the hiatus in temperature increase.

According to England increased Trade wind speeds are causing the “missing heat” to be carried down to the ocean bottom. Apparently when the Trade winds resume their normal speed the heat will spring out of the ocean and AGW will continue with a vengeance.

(see The warming is hiding in the bottom of the ocean. Someday it will pop out and say BOO!)

Seriously, that’s what his paper says.

The hiatus in temperature, that is temperature has stopped, is a complete contradiction to AGW. Lord Monckton shows this in his usual elegant fashion: 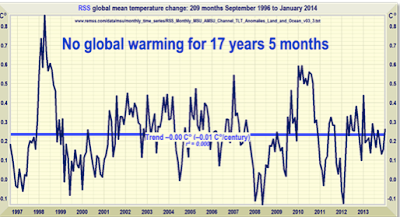 Even Skeptical Science has warmed to the idea: 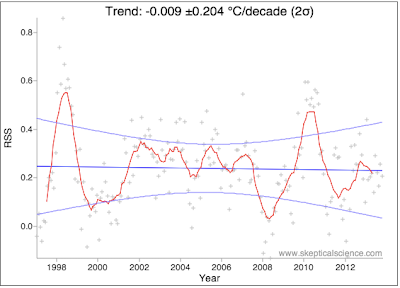 So there it is, temperature as measured by the most reliable of the temperature indices from satellites shows temperature flat for over 17 years, which according to Ben Santer, a leading pro-AGW scientist, makes it climatically significant.

The converse of this of course is that 17 years is also sufficient to identify NO human effects on climate.

This 17 year threshold obviously explains why England 2 years ago denied there was a “pause” in the temperature trend.

But he’s now on board and he accepts that the temperature has stopped rising.

But like Trenberth before him he cannot face this fundamental contradiction of AGW. Trenberth in the infamous emails said:


"The fact is that we can't account for the lack of warming at the moment and it is a travesty that we can't."

And like England now Trenberth also headed for the winds to explain how the pesky heat sunk to the bottom of the ocean. For Trenberth the “missing heat” was moved to the ocean bottom by “surface wind variability”.

In one of the AGW debate’s greatest ripostes Roy Spencer provided a graph showing that wind variability had actually declined: 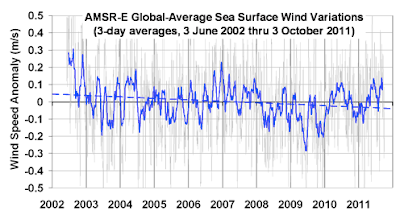 Trenberth’s mechanism for the transfer of heat to the bottom of the ocean was contradicted by the reality of the data and that is as good a symbol of the AGW debate as possible: theory and assumptions defeated by reality.

This graph also defeats England’s paper, but there are further dimensions to how wrong his paper is.

In 2006 another of the leading AGW scientists, Gabriel Vecchi wrote a paper which concluded the Trade winds were not strengthening but weakening. Vecchi said:

The vast loop of winds that drives climate and ocean behavior across the tropical Pacific has weakened by 3.5% since the mid-1800s, and it may weaken another 10% by 2100.

This is a profound contradiction to England’s conclusions. In fact Vecchi concluded every aspect of the climate system was weakening including the Walker Circulation the World’s greatest energy movement system. Astoundingly, the ABC, just as they reported England as gospel this time, also reported Vecchi in 2006!

But even Vecchi’s conclusions, contrary though they may be to England, are not certain with other research showing the Walker Circulation is not weakening.

The final nail in the coffin to England’s confusing paper is strong evidence that the radiation that both England and Trenberth claim to be wind-driven to the ocean bottom doesn’t exist. NOAA records show Outgoing Long-wave Radiation is increasing: 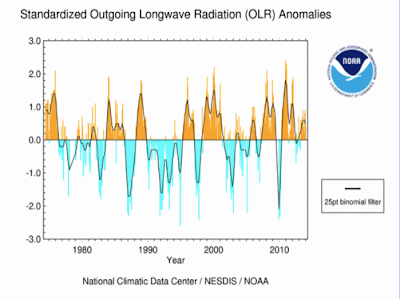 Slide from one of Dr. van Andel's lectures [Figure added by the Hockey Schtick]

There it is. That heat which England and Trenberth and all the rest think is at the bottom of the ocean has left the planet. It’s a pity the climate scientists couldn’t leave too and leave the rest of us alone. Global monthly mean sea-surface temperature (SST) anomalies relative to a 1961-90 climatology from satellites (ATSRs: Along-Track Scanning Radiometers) and in-situ records (HadSST3). Black lines: the 100-member HadSST3 ensemble. Red lines: ATSR-based night-time subsurface temperature at 0.2 m depth (SST0.2m) estimates from the ATSR Reprocessing for Climate (ARC) project. Retrievals based on three spectral channels (D3, solid line) are more accurate than retrievals based on only two (D2, dotted line). Contributions of the three different ATSR missions to the curve shown are indicated at the bottom. The in-situ and satellite records were collocated within 5+ 5 degree monthly grid boxes: only those where both datasets had data for the same month were used in the comparison. (Adapted from Merchant et al. 2012.)

Satellite observations of global sea-surface temperature show that a 30-year upward trend has slowed down within the last 15 years. Climate scientists say this is not the end of global warming, but the result of a rearrangement in the energy flow of the climate system and, in particular, how the ocean stores heat.

Like flying thermometers, some satellites carry instruments that provide a global view of the surface temperature of oceans and seas. Measuring the sea-surface temperature is important for improving weather and ocean forecasting and climate change research.

Satellite and local readings show that sea-surface temperature has been rising rapidly since the 1970s, in line with the overall warming of our planet. But this increase has significantly slowed in the last 15 years.

In contrast, other variables such as increasing atmospheric carbon dioxide, rising sea levels and declining Arctic sea ice have not experienced the same reduction in trend and therefore demonstrate that Earth's climate continues to change.

Scientists have speculated that one of the causes of this 'plateau' in sea-surface temperature could be a change in the exchange of ocean water between warm, surface waters and cold, deep waters below 700 m - as if the warming is 'hiding' underwater. Temperature measurements at this depth cover a relatively short period.

But the warm water won't hide below the surface forever: scientists believe that it may re-emerge later or affect other climate indicators, such as sea level or ocean circulation.

ESA's Climate Change Initiative, or CCI, responds to the need for continuous data on the energy budget in our climate system to understand better the slowing increase in sea-surface temperature. Satellite readings enable the detection of real trends in climate.

"We can observe changes in sea-surface temperature from the 19th century onwards using millions of measurements gathered by voluntary observers at sea and by buoys that drift around the oceans," said Nick Rayner from the Met Office Hadley Centre in the UK.

"CCI is developing sea-surface temperature information from satellites that provides an independent assessment of these changes over the last few decades."

Science leader for this project, Chris Merchant, says, "When comparing changes in global average sea-surface temperature from these two sources, we see they provide a consistent picture since 1996, when the most reliable satellite measurements began.

"We are now working on applying our methods to earlier satellites, in order to extend reliable satellite-based information back into the 1980s."

Nick Rayner adds: "That will allow us to combine, with increased confidence, the sea-surface temperature information from satellites with measurements gathered in the ocean, to build a better, more complete picture of past changes."

These topics, among others, were discussed this week during the CCI's Collocation Meeting at ESA's Centre for Earth Observation in Frascati, Italy.

ESA began monitoring sea-surface temperature in 1991 with the first Along-Track Scanning Radiometer on the ERS-1 satellite, followed by instruments on ERS-2 and Envisat.

ESA will continue observations of sea-surface temperature with the upcoming Sentinel-3 mission, being developed for Europe's Copernicus programme.

Claim: Warming of 0.09°C over the past 55 years is 'slowly but steadily cooking the world’s oceans'

Yes, the ocean has warmed; no, it’s not ‘global warming’ And warm water does not sink

Dr. Noor van Andel: The data does not agree with the theory of greenhouse gas induced global warming