The authors also find sea level rise relative to land in many areas is considerably higher than the global mean due to subsidence [land sinking], which is a localized phenomenon and obviously of no connection to climate change. For example, in Perth, Australia the relative sea level trend is 4.2 mm/yr [16 inches per century], but 71% of that change is due to land sinking [subsidence].

The paper adds to many other peer reviewed publications finding global sea levels are rising at only 4-7 inches per century, without any acceleration, which demonstrates there is no evidence of a human influence upon sea levels. The paper also demonstrates that sea level rise is primarily a local rather than global phenomenon, that relative sea level change is primarily related to subsidence or post-glacial rebound [land height changes] rather than melting ice or steric sea level changes [thermal expansion from warming]. 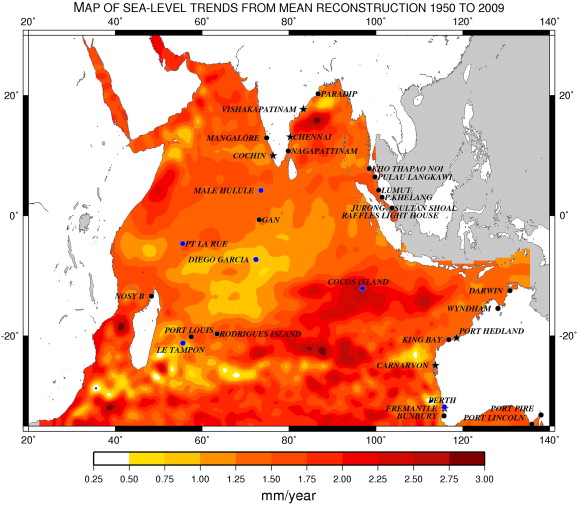 Indian Ocean is the home to many tropical low lying islands and highly populated coastal zones. Since a few recent decades, many of these zones have been gaining a lot of international attention due to fears of sea level rise and possible submersions of islands. In this study we estimate sea level rise and regional sea level variability in Indian Ocean (20°E-140°E, 30°N − 35°S) over a period of 60 years from 1950 until 2009. We determine the climatic factors that influence the sea level change and variability in this region. We find that the changes in the Indian Ocean sea level are of steric [thermal expansion] origin and are also driven by short-term Indian Ocean Dipole events. The trend in this region over 60 years amounts to 1.5 mm/yr., a value lesser (although not statistically different) than the global mean sea level rise over the same period. There is also an east–west increase in sea level trend pattern below 15°S latitude which is more amplified since the two recent decades. Climate-related sea level changes are also studied at different sites in the Indian ocean corresponding to the existence of tide gauge records and has been found that over the long term period (60 years), the sea level trend at most of the individual locations are well within the global mean sea level rise. Total relative sea level change which is the sum of climate-related sea level change and vertical land motion is also estimated at 5 locations with the help of GPS and DORIS measures.
Posted by MS at 11:14 AM