The Kaufman Correction: Before & After 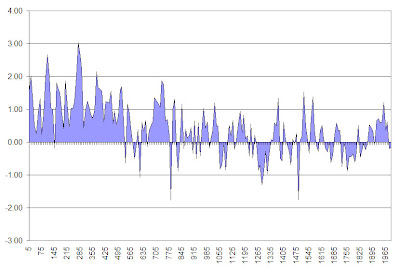 In addition, the highest peak (1.49) was in year 1975 in the draft  data, the highest peak in year 2000 in the published graphs, but 1975=2000 (1.47) in the data contained in the new corrected spreadsheet (12/09).
And here's the dramatic presentation for the public, which improperly tacks on "Mike's Nature Trick" - the instrumental record, shrinks the error bars, and makes the latest "anomaly"~1.2°C for the "trick", sets the 2000 anomaly higher than the 1975 anomaly (even though the 12/09 spreadsheet says they were the same), and adds the backdrop of melting ice for subliminal effect: