Satellite Altimetry: Rate of Sea Level Rise Slows to 1.5mm/yr (less than half of former)

Expanding on prior posts on sea levels, the rate of sea level rise as measured by satellite altimetry has fallen from 3.2mm/year over the entire satellite records (note 2 different satellites at different times) to a rate of 1.5mm/yr since 2005: 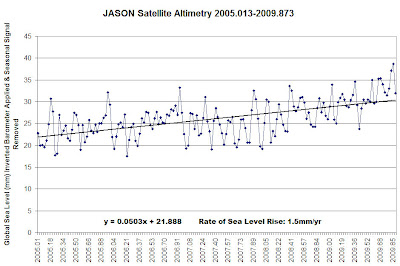 data source U. of Colorado
Polynomial fit to the entire satellite record shows slowing of the rate of sea level change, as might be expected from a slowing or reversal of global warming: 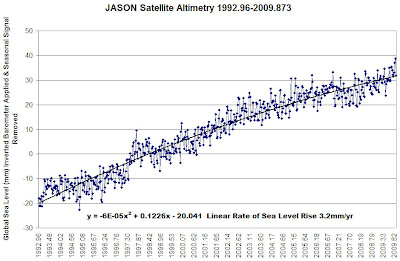 Cautionary Notes: "Sea Level" is not exactly the same as "Satellite Altimetry Level" or "Dynamic Height" and there can be divergences between them.  The title of the second graph should read TOPEX & JASON since the first half of the record to 2002 was from TOPEX
Assuming the satellite altimetric sea height current rate of 1.5mm/yr, the change per century is 15cm/century. Compare to the constantly ratcheted-down upper estimates of the IPCC for sea level rise this century from 88cm/century down to currently (in AR4) 59cm/century (a 4-fold difference).
UPDATE: MUST READ - the interview with Dr. Nils-Axel Mörner on the post immediately above which explains that the satellite altimetry records have been adjusted upward to match the faulty tide gauge records - which are rife with errors not appropriately correcting for subsiding, tectonic shifts, etc. HERE WE GO AGAIN!
Posted by MS at 7:37 AM