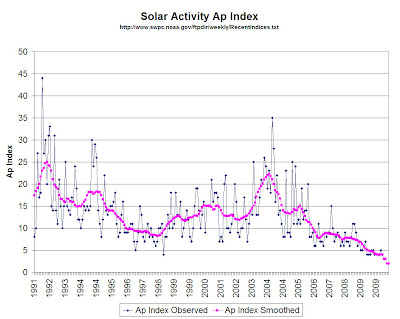 The Ap Index of Solar Geomagnetic Activity continues at historic lows in the low single digits, and can lag the month of solar cycle minimums by up to 1 year. Total Solar Irradiance (TSI) and sunspot activity appears to have bottomed in August 2009, but Ap Index bottoming could lag up to one year based on prior cycles.

Adapted from: Climate Warnings from the Sun
As of the end of January, the cumulative number of spotless days (days without sunspots) in the transition into solar cycle 24 now stands at 774. The number of spotless days is clamping down quickly. There were only 3 spotless days in January, 2010.
Solar minimums end rather abruptly. It appears very likely that the final number for this solar minimum will come close to 800. The transitions into the recent Solar Cycles (SC16-23) covering the past 7 decades averaged 362 cumulative spotless days. Therefore it is becoming obvious that the sun has undergone a state change.
The Average Magnetic Planetary Index (Ap index) is a proxy measurement for the intensity of solar magnetic activity as it alters the geomagnetic field on Earth. It has been referred to as the common yardstick for solar magnetic activity. An Ap index of “4″ was the lowest recorded monthly value since measurements began in January 1932. In October and November 2009, this index record was broken with values of “3″. Then in December the index sunk even lower establishing a new record with a reading of “2”. Now in January of this year the Ap index is back up to “3”.
This solar minimum is rather unusual. If we define a period of quiet sun as those months that produced an Ap index of 6 or less and compare the total number of quiet months within each solar minimum, then the results would be:

Isn’t it interesting that the Northern Hemisphere is experiencing some of the coldest, snowiest weather in decades at the same time the sun’s magnetic field produced 25 quiet months? But history has shown that when the sun gets extremely quiet such as during the Maunder and Sporer Minimums, the world experiences great cold periods referred to as the Little Ice Ages. Global temperature changes typically lag reduced solar activity due to moderating effects of heat storage in the oceans.