Sea Level Expert: "80% of us disagree with the IPCC"

according to an interview recorded 5 days ago with Sea Level Expert Dr. Nils-Axel Mörner. Dr. Mörner is the recently-retired head of the Paleogeophysics and Geodynamics department at Stockholm University in Sweden. He is past president (1999-2003) of the INQUA Commission on Sea Level Changes and Coastal Evolution, leader of the Maldives Sea Level Project. Dr. Mörner been studying the sea level and its effects on coastal areas for some 38 years.
In the interview, Dr. Morner states that none of the 33 authors of the 2001 IPCC Chapter on sea levels was considered to be a sea level expert, that all 33 were from other disciplines and selected "due to loyalty" to the IPCC. Furthermore, Dr. Morner estimates that of the 300-400 individual scientists "in the sea-level [scientific] community", 80% of sea-level experts disagree with the IPCC conclusions regarding sea level rise.
I have emailed Dr. Morner for his reply to the critique by Nerem et al and any comments on the post here "Global Sea Level Decrease 2004-2010 Part 2"  and will post his reply here.

Graphs from a Chapter written by Dr. Morner in the book Encyclopedia of Coastal Science by Maurice L. Schwartz, editor, showing TOPEX satellite altimetry data with no long term trend prior to the slew of adjustments broadly outlined by Nerem et al: 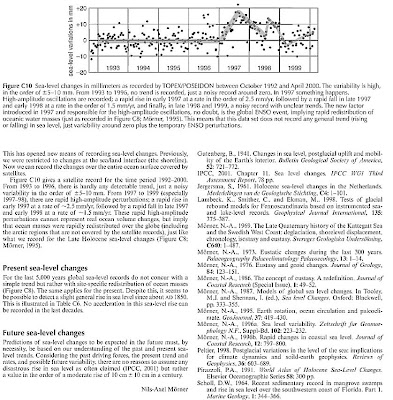 John Daly also has a graph of the same period of TOPEX satellite data, which shows a linear trend of 0.9 mm/yr.

At some point in time, this data was greatly adjusted to show a rise of 3.2mm/year, an increase of over three-fold, which is the only data now available from the University of Colorado sea level site. There is no publicly available record of how and why these large changes were applied to the original satellite data. Inquiring minds want to know.
Posted by MS at 10:54 AM