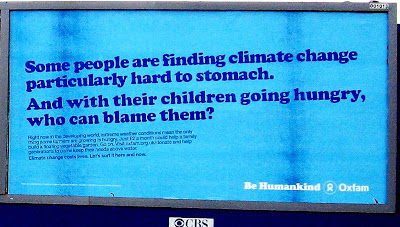 The billboard ad above leads one to believe that 'man-made' climate change is increasing 3rd world hunger and that donations to Oxfam are necessary to build "floating vegetable gardens" and to "keep their heads above water." But, let's look at the facts instead. Percentage of malnourished individuals in developing nations is now less than half that of the 1969-1971 cold period:

Despite 'climate change,' famine has declined rapidly in the 20th century (see multiple references in this poster from Bjorn Lomborg), and world agricultural production is projected to increase from 1800 Mt to 3900 Mt by the end of the 21st century (ML Parry et al, 2004:64 in Lomborg poster). Also note, flooding is 10 times more common during periods of global cooling than periods of global warming, and that global sea levels have been rising since the last ice age, at a currently decelerating rate of only 7 inches per century. Please also note, CO2 is airborne plant fertilizer.
Posted by MS at 12:09 PM