A new peer-reviewed paper published in Theoretical and Applied Climatology points out that there little empirical evidence for AGW, and that "At best, the empirical evidence for human impact on  climate change...is based on correlational research." One of the first principles of science is that "correlation does not equal causation," but as this paper shows, the IPCC essentially equates correlation with causation without consideration of alternative theories that could potentially falsify the AGW theory. In addition, the paper is critical of the IPCC "cherry-picking" data to confirm AGW while ignoring contradictory data, and the use of a "consensus," stating "if reaching consensus were really the hallmark of sound science, the scientific theories of Galileo, Copernicus, Darwin, and many others would never have seen daylight" and "scientists need to make a living, and they will not bite the hand that feeds them, an argument used by some advocates of AGW who claim that climate skeptics are sponsored by “Big Carbon”. Therefore, consensus must be dismissed as a defining feature of science."

Selected excerpts from the paper:

Briefly stated, the major shortcoming of the verification criterion is that it allows only experience to decide upon the truth or falsity of scientific statements (Popper 1965: 42; see Rapp 1975). Popper's most important contribution to the debate was to state that every scientific theory should be able to list counter-examples which, if found in reality, disconfirm (“falsify”) the theory. This is the principle of falsification. In the case of anthropogenic global warming (AGW), the theory should list one or more counter- examples that could (potentially) disconfirm the theory. This listing of potential falsifiers appears to be missing in the present debate on AGW. In fact, some skeptics in the debate on AGW point out that all natural climatic disasters are used as evidence (verification) for the human impact on climate, whereas evidence that a post WWII global warming is absent in, e.g., the Greenland Ice-Core Bore Record [see related graph below] is ignored as falsifying evidence (see, e.g., Dahl-Jensen et al. 1998; Feldman and Marks 2009). Needless to say that a methodologically sound theory would encompass all available evidence and not “cherry-pick” those pieces of evidence that confirm the theory while ignoring those that do not.

Unfortunately, when a theoretical phenomenon such as AGW becomes a global political program, it soon becomes vulnerable to methodological fallacies in the realm of social and political science. Leaving aside the quality of used data and methods, the IPCC report aimed at reaching a consensus. Consensus is recognized by some social scientific method- ologists as the defining feature of social science (Swanborn 1996; Feyerabend 1987). However, if reaching consensus were really the hallmark of sound science, the scientific theories of Galileo, Copernicus, Darwin, and many others would never have seen daylight. Also, there is no guarantee that majorities will reach sensible opinions.

Finally, scientists need to make a living, and they will not bite the hand that feeds them, an argument used by some advocates of AGW who claim that climate skeptics are sponsored by “Big Carbon”. Therefore, consensus must be dismissed as a defining feature of science. The IPCC recognizes the limitation of consensus by adding the phrase ‘and much evidence’ when it makes statements as in, e.g., “there is high agreement and much evidence that with current climate change mitigation policies and related sustainable develop- ment practices, global GHG emissions will continue to grow over the next few decades” (IPCC 2007: p. 7, italics added). We must therefore discuss the sources of evidence that are used to formulate the many causal statements on AGW issued in the report.

The quality of all scientific research depends of course, on the quality of the data that are being processed. Regardless of the quality of the (statistical) model used for analysis, if bad data are fed to the model, then the result of the analysis will be bad. This principle is known as garbage in–garbage out. In other words, if the data that are fed into climate models are open to dispute, then so are the projections of these models. In the scientific (i.e., peer- reviewed) literature, several authors have expressed doubts about the quality of the analyzed data and the possibility to derive at valid inferences on human impact on global warming (e.g., Jaworowski 1994; Soon et al. 2004; Michaels 2008; Pielke et al. 2007).

For instance, if the AGW hypothesis is to be confirmed, data are required that quantify the amount of human produced CO2  as separated from the amount produced by other sources (e.g., volcano's) and as separated from the amount of CO2  dissipated in oceans for a time span that covers theoretically justified time lags (perchance in the order of centuries). An “aggregate” causal variable that combines radiative forcing of greenhouse gasses, anthropogenic sulfur emissions, and radiative forcing of solar irradiance cannot provide “direct evidence that, since 1870, human activity is largely responsible for the increase in global surface temperature” (cfr. Kauffmann et al. 2006: 225, 250).

...in adopting Swanborn's (1996) “regulative idea of striving after truth by consensus within the scientific community over research results”, we are always in danger of replacing the purpose of science (knowledge) with a by-product of science (consensus in the form of “common sense”).
Theor Appl Climatol DOI 10.1007/s00704-010-0355-y

Abstract: At best, the empirical evidence for human impact on climate change, more specifically, the anthropogenic global warming (AGW), is based on correlational research. That is, no experiment has been carried out that confirms or falsifies the causal hypothesis put forward by the International Panel on Climate Change (IPCC) that anthropogenic increasing of green house gas concentrations very likely causes increasing of the (mean) global temperature. In this article, we point out the major weaknesses of correlational research in assessing causal hypotheses. We further point out that the AGW hypothesis is in need of potential falsifiers in the Popperian (neopositivistic) sense. Some directions for future research on the formulation of such falsifiers in causal research are discussed. Of course, failure to find falsifying evidence in empirical climate data will render the AWG hypothesis much stronger. 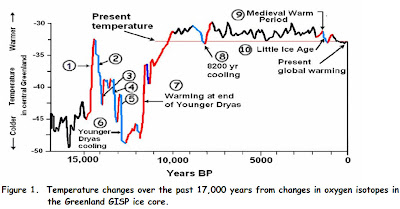