Paper: Medieval Warming Period Hotter than Present in most Regions

A recently published book, Climate Change and Variability, features a chapter titled "A Regional Approach to the Medieval Warm Period and the Little Ice Age," by Fredrik Ljungqvist. The author finds the presently available paleoclimate data do not support the assumption that late 20th century temperatures exceeded those of the Medieval Warming Period in most regions. He finds that the conclusions of the IPCC were based on "too few proxy records or [have] been based on instrumental temperatures spliced to the proxy reconstructions." The author concludes that the claim of Michael Mann and the hockey team that the MWP was restricted to the North Atlantic region "can be rejected." From the conclusion, 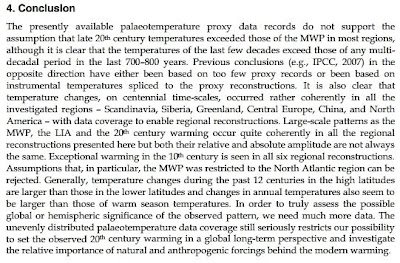