TESTIMONY OF PATRICK J. MICHAELS TO THE SUBCOMMITTEE ON ENERGY AND ENVIRONMENT, COMMITTEE ON SCIENCE AND TECHNOLOGY, U.S HOUSE OF REPRESENTATIVES, NOVEMBER 17, 2010

Thank you for inviting my testimony. I am a Senior Fellow in Environmental Studies at the Cato Institute and Distinguished Senior Fellow in the School of Public Policy at George Mason University. This testimony represents no official point of view from either of these institutions and is tendered with the traditional protections of academic freedom.

My testimony has four objectives

1) Demonstration that the rate greenhouse-related warming is clearly below the mean of climate forecasts from the United Nations Intergovernmental Panel on Climate Change (IPCC) that are based upon changes in atmospheric carbon dioxide concentrations that are closest to what is actually being observed,

2) demonstration that the Finding of Endangerment from greenhouse gases by the Environmental Protection Agency is based upon a very dubious and critical assumption,

3) demonstration that the definition of science as a public good induces certain biases that substantially devalue efforts to synthesize science, such as those undertaken by the IPCC and the U.S. Climate Change Science Program (CCSP), and

4) demonstration that there is substantial discontent with governmental and intergovernmental syntheses of climate change and with policies passed by this House of Representatives.

Climate change is nothing new, even climate change induced by human activity. What matters is not whether or not something so obvious exists, but to what magnitude it exists and how people adapt to such change.For decades, scientists have attempted to model the behavior of our atmosphere as carbon dioxide and other greenhouse gases are added above the base levels established before human prehistory. The results are interesting but are highly dependent upon the amount of carbon dioxide that resides in the atmosphere, something that is very difficult to predict long into the future with any confidence. It is safe to say that no one—no matter whether he or she works for the government, for industry, or in education—can tell what our technology will be 100 years from now. We can only say that if history is to be any guide, it will be radically different from what we use today and that therefore projecting greenhouse gas emissions so far into the future is, to choose a word carefully, useless.

One thing we are certain of, though, is that the development of future technologies depends upon capital investment, and that it would be foolish to continue to spend such resources in expensive programs that will in fact do nothing significant to global temperature.

Fortunately, despite the doomsaying of several, we indeed have the opportunity to not waste resources now, but instead to invest them much further in the future. That is because the atmosphere is clearly declaring that the response to changes in carbon dioxide is much more modest that what appears to be the consensus of scientific models.

Testimony Objective #1: Greenhouse-related warming is clearly below the mean of relevant climate forecasts from the IPCC

Figure 1 shows the community of computer model projections from the IPCC‘s midrange scenario. Observed changes in atmospheric carbon dioxide concentrations correspond closer to this one than to others. You will note one common characteristic of these models: they predict warmings of a relatively constant rate. This is because, in large part, the response of temperature to changes in atmospheric carbon dioxide is logarithmic (meaning that equal incremental increases produce proportionally less warming as concentration increases), while the increase in carbon dioxide itself is a low- order exponent rather than a straight line. This combination tends to produce constant rates of warming. 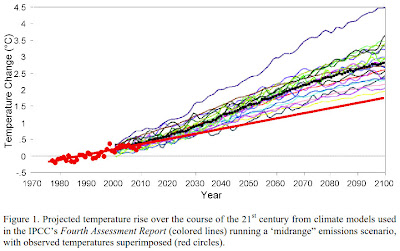 The various models just produce different quasi-constant rates. Divining future warming then becomes rather easy. Do we have a constant rate of warming? And if so, then we know the future rate, unless the functional form of all of these models is wrong. And if this is wrong, scientists are so ignorant of this problem, that you are wasting your time in soliciting our expertise. {see remainder of testimony here}