A paper published today in the journal Atmospheric Chemistry and Physics  finds "perhaps the most compelling evidence presented thus far of a GCR [Galactic Cosmic Ray]-climate relationship." The galactic cosmic ray theory of Svensmark et al explains how small changes in the solar magnetic field during solar cycles can be amplified via effects on galactic cosmic rays, which in turn seed cloud formation to affect global climate.

Dr. Roy Spencer illustrates the magnitude of poorly-understood cloud effects on climate in his new book, "The most obvious way for warming to be caused naturally is for small, natural fluctuations in the circulation patterns of the atmosphere and ocean to result in a 1% or 2% decrease in global cloud cover. Clouds are the Earth’s sunshade, and if cloud cover changes for any reason, you have global warming — or global cooling."

As also noted in a paper presented earlier this year by physicist Dr. Horst Borchert, satellite measurements show that global warming between about 1980 to 2008 was "not anthropogenic but caused by natural activities of the Sun’s surface" via the GCR-climate relationship. 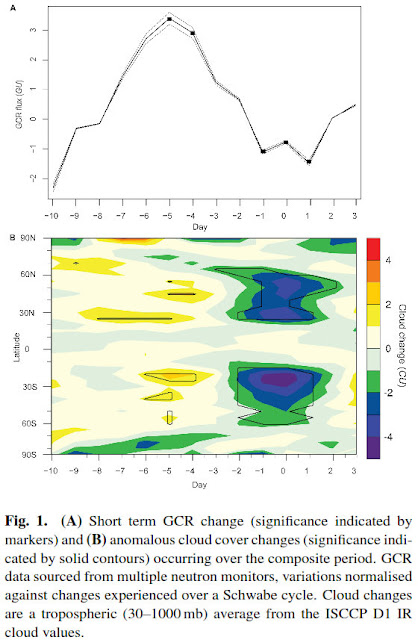 Abstract. The effect of the Galactic Cosmic Ray (GCR) flux on Earth's climate is highly uncertain. Using a novel sampling approach based around observing periods of significant cloud changes, a statistically robust relationship is identified between short-term GCR flux changes and the most rapid mid-latitude (60°–30° N/S) cloud decreases operating over daily timescales; this signal is verified in surface level air temperature (SLAT) reanalysis data. A General Circulation Model (GCM) experiment is used to test the causal relationship of the observed cloud changes to the detected SLAT anomalies. Results indicate that the anomalous cloud changes were responsible for producing the observed SLAT changes, implying that if there is a causal relationship between significant decreases in the rate of GCR flux (~0.79 GU, where GU denotes a change of 1% of the 11-year solar cycle amplitude in four days) and decreases in cloud cover (~1.9 CU, where CU denotes a change of 1% cloud cover in four days), an increase in SLAT (~0.05 KU, where KU denotes a temperature change of 1 K in four days) can be expected. The influence of GCRs is clearly distinguishable from changes in solar irradiance and the interplanetary magnetic field. However, the results of the GCM experiment are found to be somewhat limited by the ability of the model to successfully reproduce observed cloud cover. These results provide perhaps the most compelling evidence presented thus far of a GCR-climate relationship. From this analysis we conclude that a GCR-climate relationship is governed by both short-term GCR changes and internal atmospheric precursor conditions.
Posted by MS at 9:26 AM