Game Over in the Carbon War, as CCX Closes? ECX Next? 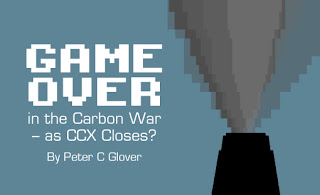 While the next climate summit in Cancun, Mexico at the end of this month will make a show of sifting the geopolitical wreckage from last December’s climate summit, any real prospect for coordinated international action is, post-Copenhagen, dead in the political water. As if that were not enough, the bête noire of climate alarmists, King Coal, is, once again, reigning supreme.

All of which begs the question: with all hopes for a global CO2 impact blown away, why are politicians tenaciously clinging to the fiction that regionalised carbon trading schemes – like the Western Climate Initiative – can succeed where national and international ones have failed?

Speaking to Energy Tribune, Dalibor Rohac, Research Fellow at London’s Legatum Institute which produces the annual Legatum Global Prosperity Index, explains, “If you believe that CO2 emissions are a major factor driving climate change you need to reduce emissions globally. Cutting emissions unilaterally through, say, increasing the price of carbon in one country or group of countries, leads to carbon leakage as carbon-intensive industries will move to jurisdictions where emissions are not restricted.”

Without international and national binding agreements the reluctance of industry to participate is already reflected in the slow death of carbon trading initiatives.

By the end of the year, the Chicago Climate Exchange (CCX), the only U.S. national carbon market which trades all six greenhouse gases, will quietly close its doors to its carbon credits business – the main purpose for which it was set up. Not that this major turning point warranted much coverage in the mainstream media which has made a new genre out of the war on CO2. While the Atlanta-based Intercontinental Exchange only purchased the CCX last April, its voluntary but legally binding system has reportedly ground to a halt in the absence of a federally-enacted cap and trade scheme.

Meanwhile, across the water the European Climate Exchange (ECX), the leading platform for the EU’s Emissions Trading Scheme, is still trading. But when the Kyoto Protocol expires in 2012 with its requirement for mandatory carbon caps, it is widely expected to go the way of its Chicago sister – and a new British report makes clear why.

According to the report by Sandbag, a group calling for even tighter greenhouse controls, the entire five-year period of the EU’s ETS is set to deliver miniscule carbon savings of less than one third of 1 per cent of total emissions. The world’s oldest carbon trading scheme has simply failed to make any serious impact on global carbon emissions, the purpose for which all such schemes exist.

In June 2010, Japan put on hold plans to introduce emission trading laws. Australia has delayed any decision on a carbon trading scheme until 2013 at the earliest and at the Copenhagen conference India’s Environment Minister Jairam Ramesh stated flatly, “India will not accept any emission reduction target – period.”

In North America, however, local politicians still insist that regional initiatives, including the Greenhouse Gas Initiative in the east of the United States and the Western Climate Initiative (WCI) in the west and Canada, could prosper. The WCI, for instance, is a partnership of seven U.S. states and four Canadian provinces. The WCI wants to establish a cap and trade system by January 2012 that, ultimately, aims to reduce regional greenhouse gas emissions to 15 percent below 2005 levels by 2020.

“This is simply puzzling,” says Rohac. “Regional initiatives are unlikely to have any effect whatsoever on global emissions and therefore on climate change.”
Read more
Posted by MS at 8:35 AM