From Greenie Watch: Paper located here
It is by De Jager and Duhau. Page 99 onwards is probably the most interesting part. I haven't been able to download any part of it and Google does not know of it but it is a chapter in a book about global warming in the 21st century. The authors are students of what goes on in the sun, with particular reference to solar cycles. They find that solar activity has a large influence on earth's temperature, with only a third of one degree of global warming over the last 400 years NOT predictable from solar activity. And that component could well be due to errors of measurement on the ground.

Of greatest interest, however, they say that we have just finished a grand maximum of temperature and are now headed downhill for a grand minimum -- with a forecast drop of around 4 degrees this century. That's roughly the inverse of what the IPCC predict (a median rise of about 4 degrees) Given the high degree of correlation between solar activity and terrestrial temperature that the authors report, their prediction is many orders of magnitude more reliable than the output of the chaotic IPCC models that discount any influence from the sun. So global cooling here we come! 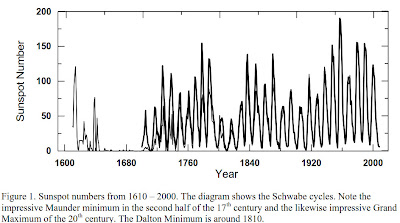