Can Solar or Wind Energy Keep the Lights On? NO

Can Solar Energy Keep the Lights On in the UK?

According to some the UK is potentially facing the lights going out by 2015, for the simple reason that a lot of old coal plants are being shut down. (My view is that this is overplayed, but I’ll save that for a later post.)
The essence of the argument is that peak electricity demand will come dangerously close to total available electricity capacity; demand exceeding supply will result in blackouts. These blackouts aren’t likely to occur at random of course. Electricity demand varies greatly during the day, because insomniacs aside most of us aren’t doing a great deal at five am. And demand is higher in winter, because it’s colder and people feel a greater need to turn the lights on. This graph of UK electricity demand summarizes the situation: 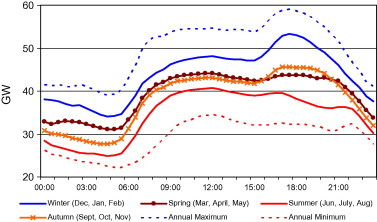 UK seasonal demand profile in 2006 (source)
Demand peaks around 6 pm in Winter, basically people come home from work, cook, turn the lights and the TV on. And noticeably demand is much higher in winter than the rest of the year. To put some firmer numbers on this here is the monthly peak in electricity demand in the UK last year. 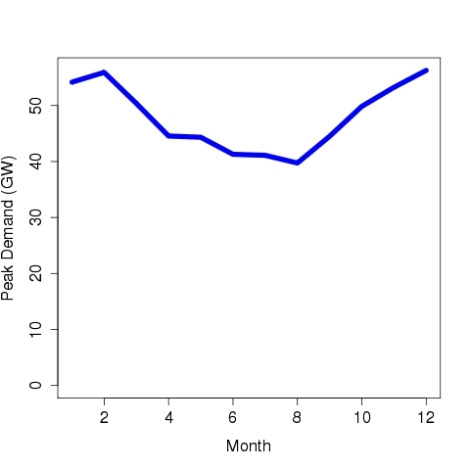 Monthly peak in UK electricity demand in 2012
It reached its highest point at 6 pm on 12th December, at just over 56 GW (note: the source for this is the National Grid’s data, which is slightly lower than actual demand). However, between April and September demand never went above 45 GW. So, quite clearly we are only likely to run into capacity problems in Winter.
So, if we want to keep the lights on, what kind of power plant do we need? Basically anything that can reliably add hundreds of megawatts or preferably gigawatts to supply at 6 pm in Winter is ideal. Obviously, nuclear, gas and coal and any other dispatchable power plant will do. Though new coal plants are out of the question, and nuclear plants won’t be built by 2016.
Wind? There are occasions total wind farm output goes to around 1% of installed capacity (e.g the lowest output in December 2012 was 83 MW out of a total of over 5,000 MW installed capacity), so it’s very unlikely that we can rely on wind at the gigawatt scale. If we built 30 GW by 2016 (an improbably figure), we have to assume that total wind farm output will regularly dip below 1 GW. Also, the chances of the UK getting new large scale storage techniques online by 2015 are essentially zero, so wind has a limited ability to keep the lights on.
How about solar?
In last week’s Guardian Jeremy Leggett had a post that seems to argue that solar is the UK’s best option for keeping the lights on. After running through, and seemingly dismissing other options, Leggett concludes “So what are we left with? Solar. That’s it.” Now, the evidence I have already shown should give a rather large hint about what is wrong with this line of argument, and Leggett alludes to the gist of it by saying:

“I have said that all forms of energy have their downsides. Solar’s are that it doesn’t work at night.”

Unfortunately this line of thought is not taken very far at all.
The basic problem: electricity demand peaks in Winter at 6 pm,  and anyone who has spent any time in the UK will know that the total sunlight at 6 pm in December is a rather easy number to remember: zero. This rather trivial engineering barrier probably does not worry an unscrupulous solar sales man, but it should worry the rest of us.
But perhaps we can store the stuff. This again faces some simple engineering problems. Even if we could get a lot of storage online by 2016 solar panels are not exactly going  full tilt in Winter. Here is monthly solar production in Germany last year:

Despite having more solar capacity in December than May (around 30 GW compared to 26 GW) total solar production was almost ten times lower in December.
Think about how much solar power Germany got on 12th December last year. It peaked at 1.6 GW, and that’s with a total capacity of about 30 GW. The UK, with its slightly cloudier climate and more northerly location cannot expect to do much better. Storing a trickle of solar energy in the middle of the day for use at night does not appear to be get us very far in preventing blackouts. 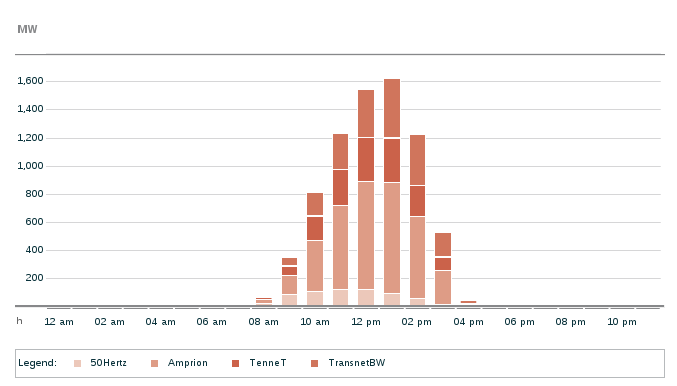 So, the sales pitches of solar entrepreneurs aside solar power will not be keeping the UK’s lights on.

Robert Wilson is a PhD Student in Mathematical Ecology at the University of Strathclyde.
His secondary interests are in energy and sustainability, and blogs on these issues at Carbon Counter.
Posted by MS at 8:34 AM