WSJ: Venture capital for clean tech has plunged 44% since 2011

Mr. Clean Tech Won't Back Down

WSJ.COM 5/29/13: When renewable-fuels company KiOR Inc. raised money in March, it didn't tap the stock market, where it has faced a rocky reception since going public in 2011. KiOR turned instead to its earliest investor: billionaire venture capitalist Vinod Khosla.
Out of his own pocket, Mr. Khosla lent KiOR $50 million so the Pasadena, Texas, company could build a facility to turn wood and other nonfood sources of feedstock into a renewable crude oil using a proprietary technology that it further processes into gasoline and diesel fuel. That followed a $25 million loan to KiOR from Mr. Khosla's venture-capital firm, Khosla Ventures, in early 2012. 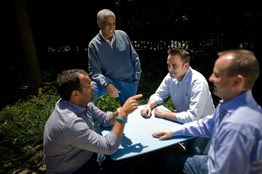 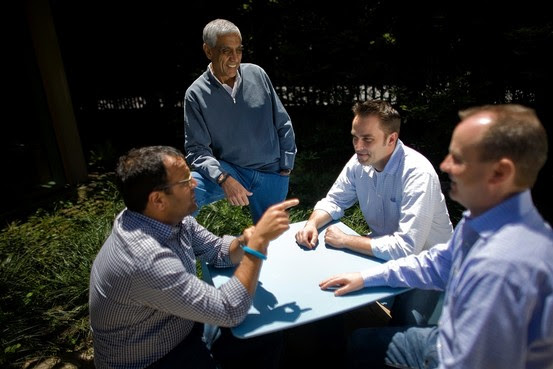 Vinod Khosla, standing, and Khosla Ventures partner Samir Kaul, left, meet with officials from startup Calera Cement.
KiOR and Mr. Khosla declined to detail terms of the loans. KiOR Chief Executive Fred Cannon said the venture capitalist "has been an outstanding supporter" even though the renewable-fuels sector is out of favor with investors.
The loans underscore how Mr. Khosla and his firm are sticking with one of the loneliest corners of the venture-capital world—clean technology—as other venture firms have fled following expensive bets on solar and other areas that yielded lackluster returns and flops such as Solyndra LLC and Fisker Automotive Inc.

With the continuing commitment comes a host of headaches. Khosla Ventures has held the bag on clean-tech startups that other venture capitalists have abandoned. Mr. Khosla—one of the co-founders and later chief executive of Sun Microsystems Inc. and later a general partner at venture firm Kleiner Perkins Caufield & Byers—has dipped into his own wallet to keep companies afloat. He and his partners have had to find new investors for clean-tech deals.
Khosla Ventures, which was formed in 2004 and has raised more than $2.5 billion—more than half of which has gone into clean tech—has been "adjusting strategies" and getting "creative in getting investors," said Mr. Khosla from his office on venture-capital row on Sand Hill Road in Menlo Park, Calif. "Previously within five miles of here, you could do all financings. Now, not within 2,000 miles of here" can you do them.
Still, Mr. Khosla said "there's no reason for us to back off." Clean-tech startups are operating in "humongous markets and there's a lot of disruptive technologies to come [with] great economics," he said.
Mr. Khosla, 58 years old, added that he isn't afraid of making big bets. He said many investors reduce risk to the point where the returns are inconsequential. "We set our goals much more ambitiously," Mr. Khosla said.
What's more, investing in clean tech is less competitive and cheaper now, said Khosla Ventures partner Samir Kaul.
Earlier this year, the firm spent $1 million to snag a 33% stake in battery startup Alveo Energy. These valuations "are awesome," Mr. Khosla said.
"One of the things about Vinod is he thinks big," said Geoff Yang, a venture capitalist at Redpoint Ventures, which has "de-emphasized" its clean-tech investments. "He may be right [about clean tech] if he can pick the very few startups that break out, but we don't like the odds in the industry."
In sticking to his guns on clean energy, Mr. Khosla has had setbacks. One was ethanol company Range Fuels, which declared bankruptcy in late 2011 after raising more than $165 million in venture capital.
Mr. Khosla declined to detail his losses but said that when he realizes some startups were about to fail, he cuts off investments or tries to turn the companies toward new strategies.
Many of his remaining clean-tech companies are well positioned, he said, because they don't rely on government subsidies. 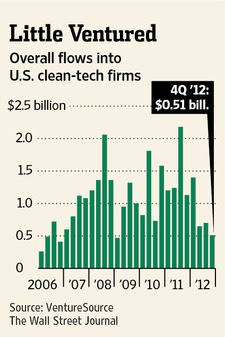 While he wasn't specific on returns, one of his firm's funds, which raised $1 billion in 2009, is up about 22.4% since inception, according to filings by the California Public Employees' Retirement System, the state pension fund that invested in the vehicle.
In contrast, the average return of a U.S. venture fund for the three years ended Sept. 30, 2012, was 12.2%, according to Cambridge Associates.
Overall, funding for U.S. clean-tech companies is declining as venture firms shun the capital-intensive sector. Last year, venture investment in clean tech plunged 44% to $3.2 billion from $5.7 billion in 2011 and down from nearly $6 billion in 2008, according to VentureSource.
That other investors are dropping out of clean tech presents problems for Mr. Khosla. In late 2011, Khosla Ventures was the only investor left backing energy-production startup AltaRock Energy Inc. after co-investor Kleiner Perkins withdrew from a $10 million funding round.
AltaRock had been counting on the money to help commercialize its geothermal technology.
Mr. Khosla personally wrote checks to AltaRock to tide it over. 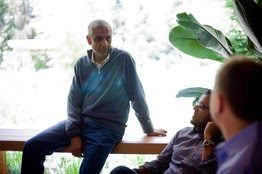 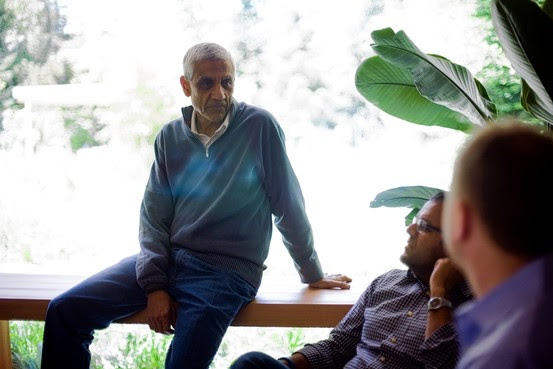 Venture capitalist Vinod Khosla
"It was mighty tough" to keep operating, said AltaRock Chief Executive Susan Petty, but Mr. Khosla's bridge loans allowed the company to keep going. Kleiner confirmed the withdrawal but declined further comment.
Khosla Ventures has been forced to look overseas and to other billionaires to finance new deals.
One co-investor these days is Microsoft Corp. co-founder Bill Gates, who recently met with officials from many of Mr. Khosla's startups at a Khosla Ventures conference.
"Vinod has a strong vision and an impressive track record of backing technologies and entrepreneurs that are disrupting the massive industries" like energy "to address the biggest challenges we collectively face," Mr. Gates said in a statement.
Khosla Ventures has recently spread its bets to invest more in technology and food-related startups. Still, Mr. Khosla said he remain committed to clean tech. "We have the guts to stick with it," he said.
Posted by MS at 1:22 PM