Extra cloud cover caused by emissions of sulphate aerosols is known to reduce global warming, but its impact in reducing temperatures has been overestimated in the climate models, new research from the Max Planck Institute has found. This research would in turn imply that climate sensitivity to CO2 has been overestimated in the climate models, since there would have to be less warming from CO2 offset by less cooling from sulphate aerosols. This also undermines Hansen's attempt to explain away the lack of global warming over the past 16 years due to sulphate aerosols.

LONDON – Extra cloud cover caused by emissions of industrial pollutants is known to reduce the effects of global warming, but its impact in reducing temperatures has been over-estimated in the climate models, new research has found.
This is particularly significant for China and India, because it has been believed that these two giant countries would be partly shielded from the effects of climate change by their appalling industrial pollution. The Max Planck Institute for Chemistry in Germany believes this potential cooling effect has been exaggerated.
The Institute’s study looked at the behavior of sulphate particles in the air created by the reaction of oxygen with sulphur dioxide released from factory chimneys and other sources of pollution.

Extra cloud cover caused by emissions of industrial pollutants is known to reduce the effects of global warming, but its impact in reducing temperatures has been overestimated in the climate models.
Credit: Ave Maria Moistlik
In humid conditions the sulphates attract water droplets and form clouds. This increase in the cloud cover reflects more sunlight back into space and so cools the earth.
The Max Planck researchers went to study a cloud formed at the top of a mountain, taking samples at various times to see how the sulphates reacted progressively.  What was crucial was how the sulphates were formed in the first place.
Current climate models assume that hydrogen peroxide and ozone have a large role in creating the sulphates, but the new research shows that the catalysts for the chemical reaction are more likely to be metal ions like iron, manganese, titanium or chromium.
The key factor is that all of these are heavier than hydrogen peroxide and ozone, and because of this are more likely to fall out of the cloud through the pull of gravity, thus considerably reducing the cooling effect of the original pollution.

Eliza Harris and Bärbel Sinha, with a number of other scientists, captured the air samples and examined the isotopes in a mass spectrometer.
Harris, who was recently awarded the Dieter Rampacher Prize as the youngest doctoral candidate of the Max Planck Society, said: “The relative reaction rates of isotopes are like fingerprints, which tell us how the sulphate was formed from the sulphur dioxide.”
“As my colleagues and I compared the basic assumptions of climate models with my results we were very surprised, because only one of twelve models considers the role of transition metal ions in the formation of sulphate,” said Harris, who is now working at the Massachusetts Institute of Technology (MIT) in the U.S.
Because of the extra size of the sulphates and hence their greater weight, compared with the previous assumptions, she believes that climate models have over-estimated the cooling effect of the sulphate aerosols by assuming they would stay airborne longer.
So far the findings have not been factored into calculations on the regional effect of climate change. Harris says that in Europe, where pollution from industrial processes is already on the decline, the change in the calculations on warming would be relatively small.
However, in the growing industrial giants like India and China, where coal-fired power stations and other forms of industrial pollution are throwing out sulphur dioxide at an ever-greater rate, then the effect could be considerable. Further research on this is continuing.
Paul Brown is a joint editor at Climate News Network. Climate News Network is a news service led by four veteran British environmental reporters and broadcasters. It delivers news and commentary about climate change for free to media outlets worldwide.

Life span of cloud-forming sulfate particles in the air is shorter than assumed due to a sulfur dioxide oxidation pathway which has been neglected in climate models so far
Sulfur dioxide is as antagonist of greenhouse gases less effective than previously assumed. It forms sulfate aerosol particles in the air, which reflect sunlight, and as so-called cloud condensation nuclei influence the chemical processes within clouds. Therefore, sulfate aerosol particles help to cool the earth, making them an important factor in climate models. However, a team around researchers from the Max Planck Institute for Chemistry found out that it is likely most models overestimate the cooling effect of these particles. The reason is a largely disregarded reaction pathway catalysed by mineral dust within clouds, which has a strong influence on the life span of sulfate aerosol particles and their ability to reflect sunlight. 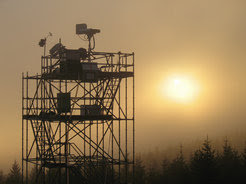 Zoom Image
Measurement Station Schmücke. HCCT 2010 (Hill Cap Cloud Thuringia 2010) - A ground-based integrated study of... [more]
© Dr. Stephan Mertes/TROPOS
In their role as condensation nuclei, aerosol particles are an important trigger for the formation of clouds. As humidity accumulates on the particles droplets are formed, which later develop into clouds. Within the clouds, however, the chemical composition of these aerosol particles changes.
In order to find out exactly what happens within the clouds, Eliza Harris and Bärbel Sinha from the Max Planck Institute for Chemistry, together with other scientists form Mainz and further research institutes, investigated different air parcels. The special feature of their experiments was that they investigated a cloud which formed on top of a mountain. The scientists could therefore trace how the aerosol particles changed while the cloud was forming.

Analysis of isotopes shows how sulfate is produced

Eliza Harris’ main focus was the analysis of sulfur compounds. She investigated their composition in air samples which were collected at different times: Before the parcels entered the cloud, while they were in the cloud, and after they left the cloud.
The sulfur compounds in the samples differed in the distribution of sulfur isotopes. Isotopes are atoms of the same elements differing in the number of neutrons in the core and thus can be differentiated with the help of a mass spectrometer. The NanoSIMS ion microprobe, a highly sensitive mass spectrometer, enabled Harris to look into the chemical processes. “The relative reaction rates of isotopes are like fingerprints, which tell us how the sulfate was formed from the sulfur dioxide”, Eliza Harris explains her method, which was part of her doctoral research in the group of Peter Hoppe at the Max Planck Institute for Chemistry.

Harris’ measurements showed that sulfate in clouds forms mostly through the oxidation of sulfur dioxide (SO2) by oxygen (O2). This reaction is catalysed by so-called transition metal ions (TMI) like iron, manganese, titanium or chromium. In addition, sulfate production mostly occurred in cloud droplets which formed on large mineral dust particles, the most important source of transition metal ions. Much less often the trail led to the oxidation of SO2 by hydrogen peroxide (H2O2) and ozone (O3). “As my colleagues and I compared the basic assumptions of climate models with my results we were very surprised, because only one of twelve models considers the role of transition metal ions in the formation of sulfate”, says the scientist, who is now working at the Massachusetts Institute of Technology (MIT) in the USA. Instead, most of the models used the alternative pathways of sulfur dioxide oxidation by hydrogen peroxide (H2O2), ozone (O3) and the hydroxyl radical (OH).
Sulfate produced catalytically through transition metal ions are formed on relatively large mineral dust particles, making them bigger than those formed through the reaction with hydrogen peroxide. Due to their size, they fall from the air at a faster rate – by force of gravity. The time frame for climate cooling by sulfate particles could therefore be shorter than has been believed.

A significant effect is expected in China and India

Eliza Harris assumes that the models have overestimated the climate cooling effect of sulfate aerosols. So far it is not quantifiable to what degree Harris’ discovery will impact climate prognoses. However, future models should consider the TMI catalysis reaction as an important pathway for the oxidation of sulfur dioxide, says the scientist. She thinks that the impact on climate models of European regions might probably be low, as mineral dust concentrations in the air are small and sulfur dioxide (SO2) emissions are declining. “In India and China, however, where sulfur dioxide emissions are expected to rise in the near future, combined with significantly higher concentrations of mineral dust in the air, the effect could be stronger”, assumes Harris. Future studies will show.
The study, which has been published in the journal Science (Vol…), was conducted in collaboration with the following institutes: the Max Planck Institute for Chemistry in Mainz, the Leibniz Institute for Tropospheric Research in Leipzig, the Department of Atmospheric Science at Colorado State University, the Earth System Science Research Centre at the Institute of Geosciences at the University of Mainz, and the Institute of Atmospheric Physics at the University of Mainz.
Eliza Harris was recently awarded the Dieter Rampacher Prize as youngest doctoral candidate of the Max Planck Society in 2012.