Cosmic rays are thought to have significant effects upon climate by increasing cloud formation and acting as amplifiers of solar activity [Svensmark's theory of cosmoclimatology]. A new paper may finally solve the mystery of what triggers lightening, finding cosmic rays interacting with water droplets within thunderclouds could play an important role in initiating lightning strikes. If confirmed, the finding could represent another mechanism by which tiny changes in solar activity can have amplified effects upon climate and weather via cosmic rays.


New insights into what triggers lightning

Cosmic rays interacting with water droplets within thunderclouds could play an important role in initiating lightning strikes. That is the claim of researchers in Russia, who have studied the radio signals emitted during thousands of lightning strikes. The work could provide new insights into how and why lightning occurs in the first place. 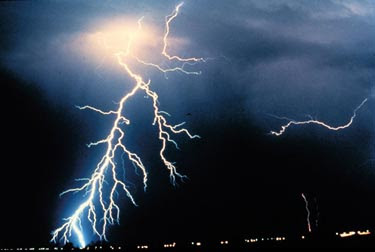 A cracking mystery
Although most people have witnessed a flash of lightning during a thunderstorm at some point in their lives, scientists still do not completely understand what triggers the discharge in the first place. Lightning has been studied for hundreds of years, yet while many possibilities for observation are available – there are about 40 to 50 lightning strikes per second across the globe – predicting the onset of a strike is difficult.
There are three basic types of lightning: lightning that occurs within a single cloud; lightning that occurs between two clouds; and lightning that occurs between a cloud and the Earth's surface. In a typical cloud-to-ground lightning strike, scientists know that an electrically-conducting plasma channel forms between the cloud and the ground, which allows the discharge to occur. However, the factors that cause the initial charging of the cloud and its subsequent discharge are not clearly understood.

Now, Aleksandr Gurevich of the Lebedev Physical Institute in Moscow and Anatoly Karashtin of the Radiophysical Research Institute in Nizhny Novgorod have suggested a new model that includes two crucial factors that could help explain the process: the behaviour of water or ice particles inside clouds, dubbed "hydrometeors"; and showers of ionized electrons that might be created by cosmic rays.
The theory that cosmic rays may cause the ionized showers that initiate lightning was first put forward by Gurevich more than 20 years ago. Known as "runaway breakdown", Gurevich suggested that the ionized particles create free electrons within thunderclouds that are then accelerated to extremely high energies by electric fields within the clouds. These electrons collide with other atoms in the air to cause an "avalanche" of high-energy particles within the cloud – and this provides the seed for the onset of lightning. While the theory was widely discussed, Gurevich was not able to find proof that cosmic rays do indeed trigger the avalanche.
In a bid to gather more evidence, Gurevich and Karashtin have now done a new analysis using a radio interferometer of radio pulses emitted at the onset of 3800 lightning strikes across Russia and Kazakhstan. A long series of these short yet strong pulses is emitted just before lightning strikes and, according the researchers, the pulse data match Gurevich's model of electrical breakdown.

The researchers also point out that the amplitude of a pulse is proportional to the number of secondary electrons, and so also to the energy of the initial cosmic ray that generates the shower. But when they calculated the cosmic-ray energy, Gurevich and Karashtin found it to be about 1017 eV – a surprising figure as cosmic rays of this energy are too rare to explain what was measured.
To explain why such high energies were observed, the researchers suggest that the hydrometeors they used become electrically polarized as the strong electric field inside the cloud builds up and that a further "micro-discharge" occurs at the hydrometeor as the field reaches its threshold, thereby effectively amplifying the cosmic-ray-initiated breakdown. When this is taken into consideration, then much more common cosmic-ray particles with energies of about 1012–1013 eV are sufficient to initialize a discharge.
Physicist and lightning expert Joseph Dwyer of the Florida Institute of Technology, who was not involved in the current research, said that the new model is "an interesting idea, but much more work is still needed, for example experiments to measure radio pulses and air showers at the same time", which is something that Dwyer and his colleagues are currently working on themselves.
Gurevich and Karashtin said that their observations show that the radio emissions are generated by the specific discharges in thunderclouds, which are different from the conventional electric discharges expected and that the “runaway breakdown” plays a significant role too. Further observations will be necessary to finally crack the mystery of the atmospheric crackle.
The research is published in Physical Review Letters.