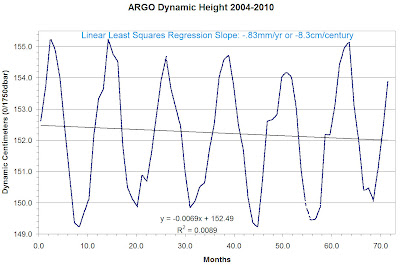 I have incorporated  reader suggestions and citations in the literature from the prior post on the linear trend of 6 years of ARGO global dynamic height data 1/31/2004 - 1/31/2010  to produce the graph above:
1. I have used a more accurate program to digitize the graph output (below) by the Pacific Marine Atlas (which only provides graphs, not datapoints)
2. I have used dynamic height from 1750 dbar depth relative to the surface (0 dbar), as used in this paper which compares ARGO dynamic height to satellite altimetry sea surface height measurements. Note: ARGO dynamic height (DH) and Satellite Altimetric Sea Surface Height (SSH) are measurements related to "sea levels" but can have divergences.

3.  The linear least squares regression equation is included and shows more of a downtrend in dynamic height (-.83mm/yr or -8.3cm/century) vs. the 0/100 dbar graph in the original post.

4. The R² of the linear regression is incorporated in the graph and is indeed low, as one would expect when trying to detect a tiny linear trend in data containing huge & chaotic seasonal and ocean oscillation components. I presume the confidence limits may be tightened by massaging out the semi-sinusoidal seasonal component by fitting a sinusoidal least-squares regression to the data, removing that component, and then doing a linear least squares fit. If anyone is so inclined to do this or would like to do your own statistical analysis, here is the spreadsheet of the digitized graph values. 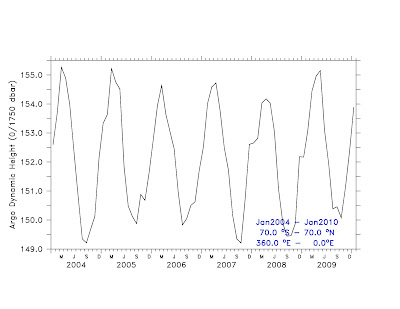 and the above graph states Total Sea Level = Steric Sea Level (measured by ARGO dynamic height) + Ocean Mass (measured by GRACE satellite gravitometer). Downloading the GRACE ocean mass data from 1/1/2004 - 12/31/2008 (data is not available online beyond 12/31/2008; from 70S to 70N to match the ARGO data;0-360E; land mask applied,postglacial rebound correction included) shows an increase in ocean mass over the time frame at a linear rate of +.77mm/year: 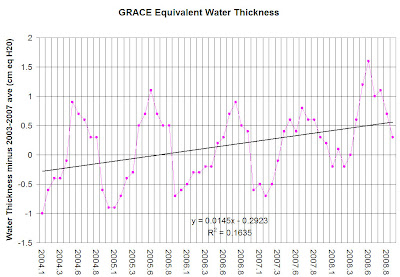 The ARGO dynamic height changed at a linear rate of -1.3mm/year during the same time frame: 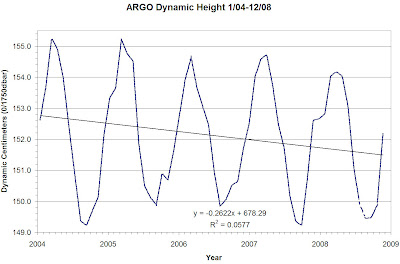 Adding the two together yields a Total Sea Level decrease of   -.53mm/yr or -5.3cm/century.
Compare to the constantly ratcheted-down upper estimates of the IPCC for sea level rise this century from 88cm/century down to currently (in AR4) 59cm/century
Posted by MS at 10:47 AM