Boehner spokesman: 'The standard the president set today should lead to speedy approval of the Keystone pipeline' 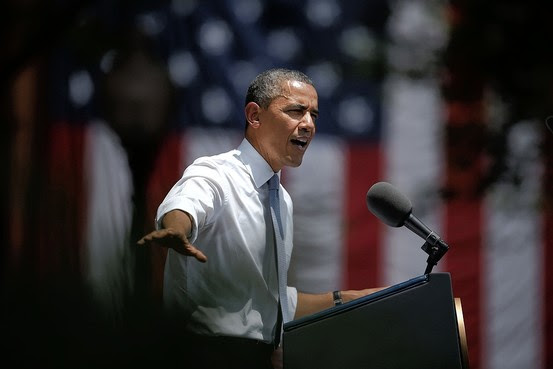 WSJ.COM 6/26/13: President Barack Obama’s unexpected mention of the Keystone XL pipeline in his climate-change speech Tuesday gave the appearance of pledging a tough line on the project’s environmental impact. But his comments were embraced by Keystone supporters, who said the pipeline has already met the president’s standards.
Standing outside Georgetown University in a blanket of heat that left him wiping sweat off his forehead, Mr. Obama said Keystone will be approved “only if this project does not significantly exacerbate the problem of carbon pollution.”
Both supporters and opponents of Keystone were quick to claim victory and said Mr. Obama signaled a decision in their favor. But Keystone’s climate impact, while still debated, has been largely determined already by the U.S. State Department.
In March, the department released a draft environmental review that said construction of Keystone would have a relatively small impact on climate change.
The department’s analysis went something like this: The process of producing Canada’s oil sands, which is what Keystone would be carrying, emits more greenhouse gas emissions than conventional types of crude oil. But if Keystone is denied, energy companies will simply find alternative ways of getting the oil sands to market. So the pipeline itself has a limited impact on emissions.
Based on that review, “the standard the president set today should lead to speedy approval of the Keystone pipeline,” said Brendan Buck, a spokesman for House Speaker John Boehner (R., Ohio).
“We welcome the fact that President Obama seems to be finally acknowledging the value of the Keystone XL pipeline,” said Charles Drevna, president of the American Fuel and Petrochemical Manufacturers. “We hope his statement means the State Department will immediately approve the pipeline.”
Environmental groups walked away with an entirely different impression, however, demonstrating how eager both sides are to win a battle that has raged for years. “As it is clear that the pipeline will increase net carbon emissions, we look forward to the president rejecting the permit,’ said Damon Moglen, a director at the environmental group Friends of the Earth.
The White House declined to elaborate on Mr. Obama’s comments.
The State Department has not yet finalized its environmental review and could still make changes to its analysis. The Environmental Protection Agency told the department in April that it should scrutinize the feasibility of alternative transport methods.
If approved, the Keystone pipeline would provide a key conduit for Canada’s oil sands to reach refineries in the Gulf Coast, becoming the last link in a network of pipelines stretching from Canada to Texas. A final decision on the project could come before the end of the year.
Posted by MS at 8:14 AM