The End Result Is Foolishness 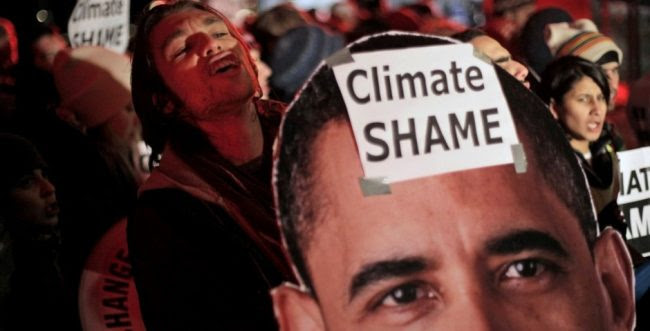 By Georgina Pijttersen, The Guardian Express, 6/22/13

With everything else going on in the US, climate change hasn't been high on the political agenda. However Obama is personally going to change that this Tuesday. The White House has confirmed that the President will explain his plan in detail on how to reduce carbon emissions, and prepare for global warming.  This afternoon Obama himself tweeted:

“We’ll need all of us, as citizens, to do our part to preserve God’s creation for future generations — our forests and waterways, our croplands and snow-capped peaks,”Obama said: “There’s no single step that can reverse the effects of climate change. But when it comes to the world we leave our children, we owe it to them to do what we can.”

However according to Hans von Storch - a meteorologist- the Climate Change model might have been a mistake. Therefore scientists have gambled away the public’s trust.

During an interview with a German news publication, von Stroch said that, scientists are bewildered by the 15-year standstill in global warming if this inclination continues their models could be “fundamentally wrong.” He said : “If things continue as they have been, in five years, at the latest, we will need to acknowledge that something is fundamentally wrong with our climate models, a 20-year pause in global warming does not occur in a single modeled scenario. But even today, we are finding it very difficult to reconcile actual temperature trends with our expectations.”

He explained that: “There are two conceivable explanations — and neither is very pleasant for us,” according to Storch. “The first possibility is that less global warming is occurring than expected because greenhouse gases, especially CO2, have less of an effect than we have assumed. This wouldn’t mean that there is no man-made greenhouse effect, but simply that our effect on climate events is not as great as we have believed.”

If Obama will take these observations of the models being a mistake, and the scientists gambling away the public’s trust, in consideration during his speech on Tuesday, is unclear at this moment. He has been talking about this topic numeral times now. For example; during a recent inaugural address, and he wants to add a call to action during his upcoming Georgetown appearance. But first things first.

He said: “This Tuesday, I’ll lay out my vision for where I believe we need to go — a national plan to reduce carbon pollution, prepare our country for the impacts of climate change, and lead global efforts to fight it.”

According to Obama climate change is something we all should be concerned with. (Apart from the wire taps, possible terrorist threats, and killer Asteroids, this topic is one we should take serious as well.

According to Obama lots of changes should be made. We should fight as a nation to make it a better world for our children. The situation can’t be reversed but it can improve, the scientist might have gambled away the public’s trust, but has Obama done so as well?

“It’s not a bad thing to make mistakes and have to correct them,” Storch stated. “The only thing that was bad was acting beforehand as if we were infallible. By doing so, we have gambled away the most important asset we have as scientists: the public’s trust.  Certainly the greatest mistake of climate researchers has been giving the impression that they are declaring the definitive truth,” explained Storch.

“The end result is foolishness along the lines of the climate protection brochures recently published by Germany’s Federal Environmental Agency under the title ‘Sie erwärmt sich doch’ (‘The Earth is getting warmer’). Pamphlets like that aren’t going to convince any skeptics.”

What do you think? Do you agree with von Storch, that the climate change model is a mistake, and that scientists have gambled away the public’s, our, trust? Or do you think there is still some truth to it?

Lets wait and see what Obama has to add to this on Tuesday.

Also in the press today:

There’s been so much stormy weather around the White House in recent weeks that it’s no wonder that President Obama has heeded the radar and returned to the familiar, vapid region of climate change.

On Tuesday, Mr. Obama heads to Georgetown University in the nation’s capital to remind his green-minded pals, global alarmists and fierce critics alike that he has not forgotten a promise of five months ago.

“In my inaugural address, I pledged that America would respond to the growing threat of climate change for the sake of our children and future

generations,” the president says in a new video that is punctuated with nice piano music and outdoor imagery that Al Gore would certainly approve of.

“This Tuesday, I’ll lay out my vision for where I believe we need to go - a national plan to reduce carbon pollution, prepare our country for the impacts of climate change, and lead global efforts to fight it,” Mr. Obama says. “This is a serious challenge - but it’s one uniquely suited to America’s strengths.”

manipulation that has gone into much climate warming reasoning. The jury is still out of whether mankind or cow-emitted methane has caused either the rising or falling of the planet’s temperature. Also missing is that fact that opportunists have arrived: federal spending on climate warming “research” is approaching $2 billion a year, according to some press reports.

Also in the mix: environmental

concerns and climate change languish at the bottom of the list of public worries say several opinion polls, bested by, oh, you know. The economy, jobs, national security.

Mr. Obama will call for the help of scientists, farmers who can grow the plants for biofuel, engineers with an eye for new energy, and workers to “build the foundation for a clean energy economy.”

“We’ll need all of us, as citizens, to do our part to preserve God’s creation for future generations - our forests and waterways, our croplands and snowcapped peaks,” Mr. Obama continues in his video

“There’s no single step that can reverse the effects of climate change. But when it comes to the world we leave our children, we owe it to them to do what we can.”

Well, that good. That’s lovely. But the White House planners must include precise thinking, genuine science and careful language among their many steps, and yeah, this should be a bi-partisan effort. The point men should separate themselves from feel good breezes and alarmist whirlwinds, and avoid making mawkish statements to the media. It could be expensive, unproductive and frustrating if they don’t.

To help the Earth, please stay down to Earth, Mr. President. In another era, determining “what works” in a clear and innovative

matter was a big help to the Reagan administration when the big thinkers where called upon for big policies.