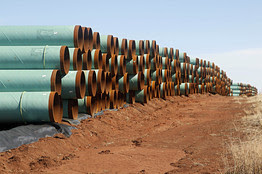 Associated Press
A photo from 2012 shows miles of pipe ready to become part of the Keystone Pipeline near Ripley, Okla.

WSJ.COM 6/26/13: President Barack Obama takes the most important environmental initiative of his presidency Tuesday when he delivers a speech announcing a series of measures he’ll take to combat global warming.
But that speech is only the first part of what figures to be an environmental and energy two-step dance Mr. Obama will attempt this year. The politics of that maneuver are tricky, and fascinating, for a president trying be both an environmentalist and a leader pulling America down the path toward energy independence.
In the first step on global warming, Mr. Obama is expected to announce steps to lower emissions of gases that are believed to contribute to climate change. They will include plans to promote cleaner energy and energy efficiency—and, most importantly and controversially, regulations to reduce greenhouse-gas emissions from not only new power plants but from existing plants as well.
Those could prove expensive steps, and the power industry figures to fight them. But liberals, who are grousing about some aspects of Obama policy, will cheer this one.
The politics gets more complicated when Mr. Obama makes his next big energy decision, on whether to approve construction of the Keystone XL pipeline to carry tar-sands oil from Canada to the Gulf of Mexico. Environmentalists despise that idea, both because they think it will only further addiction to burning fossil fuels and because they consider tar-sands oil a particularly dirty kind of energy.
But for Mr. Obama, it appears that approval of Keystone would be an overall political winner despite the objections of environmentalists in his base. The other constituencies most upset by a big global-warming program would cheer Keystone’s approval.
More important, a Pew Research Center survey taken this spring showed the Keystone pipeline approval would be broadly popular across voting groups. Among all Americans, 66% approved construction of the pipeline, while just 23% opposed it. The approval ratings ranged from 82% among Republicans to 54% among Democrats, and 60% among those under the age of 30 to 74% among those 65 and older. Even among liberals, a healthy 42% said they would approve, while 48% were opposed.

Also in the WSJ today:


WSJ.COM 6/26/13: A far-reaching plan to fight climate change detailed by President Barack Obama on Tuesday would profoundly reshape the way the U.S. produces and consumes electricity, though the resistance it is sure to encounter promises to sow uncertainty for an industry already buffeted by shifting rules and economics.
As part of a much-anticipated speech at Georgetown University, in which the president laid out the first-ever federal effort to rein in greenhouse-gas emissions from the power sector, Mr. Obama also said he would approve the controversial Keystone XL pipeline later this year if it didn't "significantly" increase net greenhouse-gas emissions. Mr. Obama's conditional remark was meant, in part, to blunt criticism that approving an oil pipeline would be at odds with his climate policy.
His speech stirred strong reactions from business leaders: Manufacturers raised fears the plan would raise electricity prices and cut competitiveness, while the plan drew support from nuclear and other clean-energy companies that stand to benefit if greenhouse-gas emissions are restricted.
Mr. Obama's push, which doesn't require congressional approval, faces years of political and legal challenges. If put into place, planned curbs could accelerate the demise of coal, the backbone of power generation since the days of Thomas Edison. New regulations could make natural gas and nuclear power more attractive, since they emit less carbon dioxide than coal-fired power plants, and they could greatly boost renewable energy, such as wind and solar power, and speed the adoption of energy-efficiency measures.
A push to cut back existing coal-fired generation capacity could also lead to a supply crunch if a recovering U.S. economy spurs greater demand for power, while possibly raising electricity rates for consumers, industry analysts said.
Mr. Obama on Tuesday offered his most aggressive attack on opponents of measures to curb carbon pollution. "We don't have time for a meeting of the flat-earth society," he said, outlining a suite of steps the administration can take without the need for legislation that would begin to meet Mr. Obama's goal of curbing greenhouse-gas emissions 17% from 2005 levels by 2020.

The centerpiece is the first-ever federal effort to regulate greenhouse-gas emissions from existing power plants, the source of about one-third of such emissions in the U.S.
Mr. Obama's plan includes other measures meant to reduce emissions, including federal loan guarantees for cleaner fossil-fuel energy projects; new fuel-economy standards for heavy trucks; and greater cooperation between the U.S. and major economies including China, India and Brazil.
The president's speech drew strong criticism from Republicans. Senate Minority Leader Mitch McConnell (R., Ky.) said the plan is "tantamount to declaring a war on jobs. It's tantamount to kicking the ladder out from beneath the feet of many Americans struggling in today's economy."
Energy experts said the new regulations could spur more use of natural gas, which emits about half the carbon dioxide of coal.
Investors saw the plan as a boon to the natural-gas industry, sending up shares in firms such as Devon Energy Corp., SandRidge Energy Inc., and EOG Resources Inc. by about 2%. 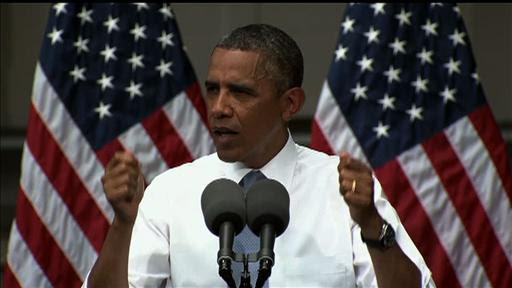 President Obama says he will direct the EPA to create carbon standards for power plants and stresses that he will work with anyone to fight climate change, but has no patience for those who ignore it, in a speech at Georgetown University on Tuesday.

Gerald F. Seib: President Obama takes his most important environmental initiative yet when he announces measures to combat global warming. But the politics of that maneuver are tricky for a president trying to be both an environmentalist and leader taking America towards energy independence. Read More
Utilities heavily invested in clean energy, including NextEra Energy Inc. and Public Service Enterprise Group Inc., also welcomed the plan, though they said they preferred legislation.
Some U.S. utilities that burn coal to generate electricity reacted with caution. "The devil is in the details," said Brad Watson, a spokesman for Luminant, a large power-plant operator in Texas that burns coal. "Overall, we want to see a policy that's broad and that would cover all sectors, not just the power sector and especially not just coal generators."
American Electric Power Inc., a Columbus, Ohio-based owner of utilities, expressed cautious optimism about the rules, saying it hopes the administration will take a "balanced approach" that will include flexibility for power-plant operators.
Vic Svec, a senior vice president of St. Louis based Peabody Energy Corp., the nation's biggest coal producer, said any reduction in coal generation would hurt Americans "who would feel the same pain at the plug that we all feel at the pump."
The coal-mining industry is already reeling from the country's glut of cheap natural gas. Any pain could spill over into the bottom lines of railroads that have turned coal-hauling into a lucrative business.
Energy analysts say the new rules, combined with environmental standards now being implemented, could push about one-third of the U.S. coal-fired fleet into retirement. Much of that shortfall could be made up from other sources, because electricity demand is nearly flat. But it could also expose industries and consumers to more volatile prices, one reason power companies have resisted relying too heavily on gas for power generation in the past.
"Natural gas has broken more hearts than any movie star. Coal is unsexy, but it's there for you," said Kevin Book, managing director at Clearview Energy Partners LLC in Washington.
Some big industrial users expressed concern that higher or more volatile power prices could undermine their competitiveness. "We compete globally against countries, including China, where the industry is often state-owned, controlled, and subsidized, including for electricity costs," said Thomas Gibson, president and CEO of the American Iron and Steel Institute.
Canada's oil industry and government welcomed Mr. Obama's statement about the proposed Keystone XL oil pipeline. Canadian Minister of Natural Resources Joe Oliver told reporters that both the Canadian government and the U.S. State Department, which heads Washington's regulatory process on Keystone, believe the controversial pipeline connecting Alberta's oil sands to the U.S. Gulf coast will not "significantly exacerbate" pollution. The CEO of Keystone operator TransCanada Corp., Russ Girling, said he was "pleased" with the president's latest remarks.
The renewed emphasis on climate change reopens Mr. Obama to Republican allegations that he is waging a "war on coal," which could be a factor in the 2014 elections in states with large coal industries. The plan received a distinctly chilly reception from coal companies and politicians in coal country.
Mr. Obama's plan also could rejuvenate an environmentalist base that had become disillusioned in the wake of Washington gridlock. "This is the change we have been waiting for on climate. Today, President Obama has shown he is keeping his word to future generations," said Michael Brune, executive director of the Sierra Club.
The measures will take years to be put in place, and may not be finished by the end of Mr. Obama's second term. Industry groups, which have been bracing for increased regulation for several years, have already signaled their intention to fight in the courts.
"The unknowns here are still much bigger than the knowns," said Michael Levi, an energy expert at the Council on Foreign Relations. "We know there will be regulations, but we don't know how aggressive or flexible they'll be."
The administration is finalizing tougher emission standards for new power plants, which must be in place before it can set rules for existing power plants. Mr. Obama said he would direct the EPA to "put an end to the bottomless dumping of carbon pollution from power plants."
Posted by MS at 8:08 AM