The Economist: The scientific 'consensus' on climate change is falling apart; the scientific & media establishment has cried wolf 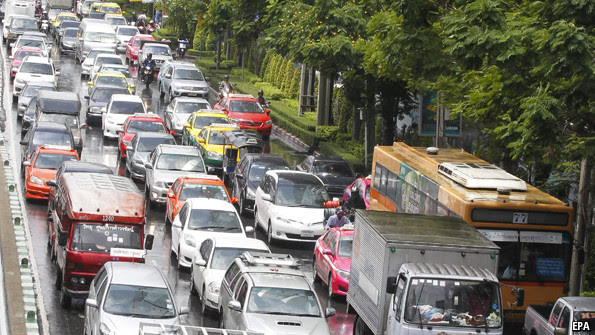 THE ECONOMIST: GLOBAL warming has slowed. The rate of warming of over the past 15 years has been lower than that of the preceding 20 years. There is no serious doubt that our planet continues to heat, but it has heated less than most climate scientists had predicted. Nate Cohn of the New Republic reports: "Since 1998, the warmest year of the twentieth century, temperatures have not kept up with computer models that seemed to project steady warming; they’re perilously close to falling beneath even the lowest projections". [This has already happened, as demonstrated by Dr. John Christy and Dr. Roy Spencer: all 73 climate models have exaggerated global warming]

Mr Cohn does his best to affirm that the urgent necessity of acting to retard warming has not abated, as does Brad Plumer of the Washington Post, as does this newspaper. But there's no way around the fact that this reprieve for the planet is bad news for proponents of policies, such as carbon taxes and emissions treaties, meant to slow warming by moderating the release of greenhouse gases. The reality is that the already meagre prospects of these policies, in America at least, will be devastated if temperatures do fall outside the lower bound of the projections that environmentalists have used to create a panicked sense of emergency. Whether or not dramatic climate-policy interventions remain advisable, they will become harder, if not impossible, to sell to the public, which will feel, not unreasonably, that the scientific and media establishment has cried wolf.

Dramatic warming may exact a terrible price in terms of human welfare, especially in poorer countries. But cutting emissions enough to put a real dent in warming may also put a real dent in economic growth. This could also exact a terrible humanitarian price, especially in poorer countries. Given the so-far unfathomed complexity of global climate and the tenuousness of our grasp on the full set of relevant physical mechanisms, I have favoured waiting a decade or two in order to test and improve the empirical reliability of our climate models, while also allowing the economies of the less-developed parts of the world to grow unhindered, improving their position to adapt to whatever heavy weather may come their way. I have been told repeatedly that "we cannot afford to wait". More distressingly, my brand of sceptical empiricism has been often met with a bludgeoning dogmatism about the authority of scientific consensus.

Of course, if the consensus climate models turn out to be falsified just a few years later, average temperature having remained at levels not even admitted to be have been physically possible, the authority of consensus will have been exposed as rather weak. The authority of expert consensus obviously strengthens as the quality of expertise improves, which is why it's quite sensible, as matter of science-based policy-making, to wait for a callow science to improve before taking grand measures on the basis of it's predictions.

Anyway, Mr Cohn cites a few scientists who are unruffled by the surprisingly slow warming.

It might seem like a decade-long warming plateau would cause a crisis for climate science. It hasn’t. Gerald Meehl, a Senior Scientist at the National Center for Atmospheric Research, has seen hiatus periods before. They “occur pretty commonly in the observed records,” and there are climate models showing “a hiatus as long as 15 years.” As a result, Isaac Held, a Senior Research Scientist at NOAA’s Geophysical Fluid Dynamics Laboratory, says “no one has ever expected warming to be continuous, increasing like a straight line.” Those much-cited computer models are composed of numerous simulations that individually account for naturally occurring variability. But, Meehl says, “the averages cancel it out.”

Isn't this transparently ad hoc. The point of averaging is to prune off exceedingly unlikely possibilities. It does not vindicate a model to note that it gives no weight—that it "cancels out"—its only accurate constitutive simulations.

If "hiatus periods are commonly observed" is the right way to think about the current warming plateau, then the rest of Mr Cohn's article, examining various explanations of the puzzle of the hiatus would be unnecessary. But, as all the pieces discussing the warming plateau make perfectly clear, climate scientists are actually pretty baffled about the failure of their predictions. Is it the oceans? Clouds? Volcanoes? The sun? An artifact of temperature data?

As a rule, climate scientists were previously very confident that the planet would be warmer than it is by now, and no one knows for sure why it isn't. This isn't a crisis for climate science. This is just the way science goes. But it is a crisis for climate-policy advocates who based their arguments on the authority of scientific consensus. Mr Cohn eventually gets around to admitting that

In the end, the so-called scientific consensus on global warming doesn’t look like much like consensus when scientists are struggling to explain the intricacies of the earth’s climate system, or uttering the word “uncertainty” with striking regularity.

But his attempt to minimise the political relevance of this is unconvincing. He writes:

The recent wave of news and magazine articles about scientists struggling to explain the warming slowdown could prolong or deepen the public’s skepticism.
But the “consensus” never extended to the intricacies of the climate system, just the core belief that additional greenhouse gas emissions would warm the planet.

If this is true, then the public has been systematically deceived. As it has been presented to the public, the scientific consensus extended precisely to that which is now seems to be in question: the sensitivity of global temperature to increases in atmospheric carbon dioxide. Indeed, if the consensus had been only that greenhouse gases have some warming effect, there would have been no obvious policy implications at all. As this paper has maintained:

If ... temperatures are likely to rise by only 2°C in response to a doubling of carbon emissions (and if the likelihood of a 6°C increase is trivial), the calculation might change. Perhaps the world should seek to adjust to (rather than stop) the greenhouse-gas splurge. There is no point buying earthquake insurance if you do not live in an earthquake zone. In this case more adaptation rather than more mitigation might be the right policy at the margin. But that would be good advice only if these new estimates really were more reliable than the old ones. And different results come from different models.

We have not been awash in arguments for adaptation precisely because the consensus pertained to now-troubled estimates of climate sensitivity. The moralising stridency of so many arguments for cap-and-trade, carbon taxes, and global emissions treaties was founded on the idea that there is a consensus about how much warming there would be if carbon emissions continue on trend. The rather heated debates we have had about the likely economic and social damage of carbon emissions have been based on that idea that there is something like a scientific consensus about the range of warming we can expect. If that consensus is now falling apart, as it seems it may be, that is, for good or ill, a very big deal.

Comment from professor and climate chair Dr. Judith Curry on this article:


JC comment:  Houston’s article hits the nail on the head re the policy implications of the pause for policy and for the consensus.    This statement struck me in particular:

Indeed, if the consensus had been only that greenhouse gases have some warming effect, there would have been no obvious policy implications at all.

This statement reflects the folly of the ‘speaking consensus to power’ approach of policy making, and danger of a manufactured consensus on climate change to the healthy evolution of climate science.   We’ve lost decades in climate science by failing to pay adequate attention to natural climate variability, particularly solar variability and multi-decadal natural internal variability.  By failing to pay adequate attention to uncertainty and natural climate variability, the climate community is facing the following prospect:

If that consensus is now falling apart, as it seems it may be, that is, for good or ill, a very big deal.

H/T Bishop Hill: The Economist continues to waver
Posted by MS at 1:04 PM