Many rural weather stations around the globe do not show warming in the 20th century, presumably due to lack of the urban heat island effect. Here is a good example with an almost uninterrupted 148 year land temperature record, apparently not "adjusted," not moved, and in a rural location not subject to surrounding urban heat effect, from an Australian weather station "NEWCASTLE NOBBYS SIGNAL STATION AWS" Go to the site to graph the latest data. 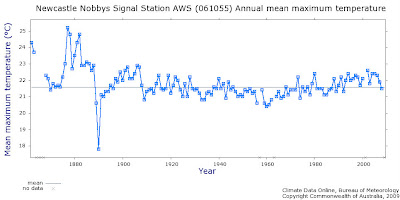 Information on the station site.


A CRU email from Phil Jones to Michael Mann, Malcolm Hughes and others, Mar 11, 2003, stated: “Even with the instrumental record, the early and late 20th century warming periods are only significant locally at between 10-20% of grid boxes.” [http://www.anelegantchaos.org/cru/emails.php?eid=296&filename=1047390562.txt]