Global Warming on 5 Other Planets

From National Geographic:
“Habibullo Abdussamatov, head of the St. Petersburg’s Pulkovo Astronomical Observatory in Russia, says the Mars data is evidence that the current global warming on Earth is being caused by changes in the sun.“
From MIT on Pluto
“the average surface temperature of the nitrogen ice on Pluto has increased slightly less than 2 degrees Celsius over the past 14 years.”
Since Pluto is moving further away from the Sun and continuing to warm despite that fact, it indicates that something doesn’t fit into “Solar Constant” dismissal theories.
From Space.com on Jupiter:
“The latest images could provide evidence that Jupiter is in the midst of a global change that can modify temperatures by as much as 10 degrees Fahrenheit on different parts of the globe.”
From MIT on Triton:
“At least since 1989, Triton has been undergoing a period of global warming. Percentage-wise, it’s a very large increase,” said Elliot, professor of Earth, Atmospheric and Planetary Sciences and director of the Wallace Astrophysical Observatory. The 5 percent increase on the absolute temperature scale from about minus-392 degrees Fahrenheit to about minus-389 degrees Fahrenheit would be like the Earth experiencing a jump of about 22 degrees Fahrenheit.”


So there is Global Warming on at least 4 other bodies in our Solar System that co-insides with the recent warming on Earth. Doesn’t this point strongly towards the Sun or some other Cosmic force as the cause?
On the origin of the runaway global warming theory of CO2 Feedback and Venus (PDF):
“Why is the albedo of Venus important? When the albedo is at 0.80, the Global Warming Theory falls apart. . .

The carbon dioxide levels on Earth have risen from approximately 0.028% to 0.036% in the last few decades. It is a major stretch to compare this with Venus at a 96.500% carbon dioxide level and promote an uncontrollable runaway condition. Earth in its early history, 385 million years ago, had an atmosphere with 10 times the present carbon dioxide levels. Those elevated levels did not produce runaway global warming then, so why should we theorize that it would today?”
Pre-conceived agendas and a scorched earth policy of accusing any critics of complicity with Big Oil or the Republican Party impedes the scientific process. Likening people who do not agree with doomsday Anthropogenic Global Warming theories to Holocaust Deniers does not get us closer to the truth. In Science, when did “Skeptic” become such a bad word?
An experiment that hints we are wrong on climate change:
“The best measurements of global air temperatures come from American weather satellites, and they show wobbles but no overall change since 1999.

That leveling off is just what is expected by the chief rival hypothesis, which says that the sun drives climate changes more emphatically than greenhouse gases do. After becoming much more active during the 20th century, the sun now stands at a high but roughly level state of activity. Solar physicists warn of possible global cooling, should the sun revert to the lazier mood it was in during the Little Ice Age 300 years ago.

In a box of air in the basement, they were able to show that electrons set free by cosmic rays coming through the ceiling stitched together droplets of sulfuric acid and water. These are the building blocks for cloud condensation. But journal after journal declined to publish their report; the discovery finally appeared in the Proceedings of the Royal Society late last year.”
Open Letter of Resignation to the IPCC from Chris Landsea:
“I personally cannot in good faith continue to contribute to a process that I view as both being motivated by pre-conceived agendas and being scientifically unsound.”
Global-warming alarmists intimidate dissenting scientists into silence:
“But there is a more sinister side to this feeding frenzy. Scientists who dissent from the alarmism have seen their grant funds disappear, their work derided, and themselves libeled as industry stooges, scientific hacks or worse. Consequently, lies about climate change gain credence even when they fly in the face of the science that supposedly is their basis.”

Mars, Jupiter, Triton, Neptune, Pluto, and others share the fate of Earth

A new storm and a new red spot on Jupiter hints at climate change, USA TODAY and dozens of other sources explained yesterday. The temperatures are expected to change by as much as 10 Fahrenheit degrees at different places of the globe. At least close to the new spot and to the equator, nothing less than global warming is expected.

New observations of Jupiter's climate change were released in 2008: click the number.

The climate of Neptune - more precisely its reflectivity - was recently changing. Lockwood and Hammel argue in Geophysical Research Letters, vol. 34 (2007) that the trends on Neptune reveal suggestive correlations of brightness of Neptune with the temperature trends on Earth, indicating their common solar origin - although I am not quite sure whether the sign is as expected. 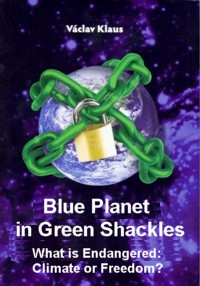 Triton is Neptune's largest Moon. Some people believe that it used to be an asteroid. Global warming was detected on Triton. Between 1989 and 1998, the temperature jumped by 5 percent on the absolute (Kelvin) scale. The same relative increase would raise the Earth's temperature by 22 degrees Fahrenheit in 9 years. See thousands of other pages about the global warming on Triton.

Another moon of Saturn's, Enceladus, would be also expected to be frozen and cold. Suddenly, Cassini has informed us that Enceladus generates its own heat. Its high temperatures seem to be incompatible with calculations based on solar energy itself, according to existing models.

Saturn itself has a rather warm southern pole, and the temperatures in that region suddenly jumped by 3-5 Kelvin degrees. Well, it's warm because it's been exposed to sunshine for quite some time but the magnitude of the temperature jumps is not trivial to calculate.

What's going on with Pluto? Well, yes, your guess is right. There is global warming on Pluto. Pluto's atmospheric pressure has tripled in 14 years, and the associated increase of temperature is estimated to be around 3.5 Fahrenheit degrees, despite the motion of Pluto away from the Sun.

Of course, the global warming on Mars is a well-known story. Between 1975 and 2000, Mars warmed up by 0.65 Celsius degrees, much faster than Earth: see Nature 2007. The warming has been used by this blog to discover the Martians. More seriously, we have explained that the dramatic and speedy melting of the Martian icecaps is caused by the greenhouse effect. 95% of "their" atmosphere is made of carbon dioxide; that's slightly more than 0.038% of our atmosphere.

The warming trend on Mars is undeniable. Some people have tried to blame the global warming on NASA's rovers. Such accusations are pretty serious because NASA is already preparing plans to occupy Mars using the greenhouse effect, as ordered by George Bush. ;-)

This planet doesn't belong to this list of planets where recent warming has been demonstrated. But it is interesting to talk about the greenhouse effect there.

Venus, our planet's evil sister, has already been identified as unusable for life because of ... yes, because of the greenhouse effect that occured in the past. Last month, the Venus express gave us some new hints why Venus has such a thick atmosphere that generated global warming.

Venus' distance from the Sun is about 70% of the distance Sun-Earth. Because of the second power, this means that there is twice as much solar radiation per area over there. Because of the fourth power in the Stefan-Boltzmann law, it means that you expect about 20% higher temperatures in comparison with Earth on the Kelvin scale which would mean, if Venus were a black body, that the temperature would still be still below 100 Celsius. But they are about 470 Celsius on Venus.

Venus is clearly not a black body and the greenhouse effect is important for raising its temperature. But you should notice that Venus' atmosphere has 90 times higher pressure than the terrestrial atmosphere and 96% of it is carbon dioxide! The Earth only has 380 parts per million of CO2, and if you divided it by 90 to get the corresponding fraction of the Venus atmosphere, you get about 4 parts per million. There is more than 100,000 times less CO2 density here than on Venus! If you used a linear relationship between the CO2 concentration and temperature boost, you would see that the expected increase of the Earth temperature due to CO2 is 400 Celsius divided by more than 100,000 which is a few millikelvins - a totally negligible amount! The actual strength of the greenhouse effect on Earth will be stronger - because the first molecules matter more - but it won't be exceedingly stronger. At any rate, when numbers are taken into account, you shouldn't expect any substantial influence of CO2 on Earth.

But let us return to the planets that are known to be currently warming.

The Earth is currently experiencing warming, too, although a less dramatic one than the previous examples. However, there is apparently a huge difference. The warming on the previous planets and moons was natural. On the other hand, the warming on Earth couldn't evolve naturally: it is caused by the humankind, evil corporations, and their intelligent design, most left-wing scientists believe. The warming trends can't have anything to do with the Sun whose activity is now highest in the last 1000 years: it is unethical to propose that the Sun plays any role, consensus scientists argue.

You may ask the consensus scientists: why is there such a difference between the explanations for the warming of the Earth and the other planets and their moons? It's because the Earth is the center of the Universe, they would answer. You could also ask: why do all these planets and moons indicate warming? Shut up, the consensus scientists would answer.

Some of them would tell you that your paradox is resolved by the anthropic principle: the people on Jupiter, Saturn, Pluto, Mars, Triton, and other celestial bodies cannot complain about the anthropogenic global warming because... because these people don't exist!