The temperature history of the first millennium C.E. is sparsely documented, especially in the Arctic. We present a synthesis of decadally resolved proxy temperature records from poleward of 60°N covering the past 2000 years, which indicates that a pervasive cooling in progress 2000 years ago continued through the Middle Ages and into the Little Ice Age. A 2000-year transient climate simulation with the Community Climate System Model shows the same temperature sensitivity to changes in insolation as does our proxy reconstruction, supporting the inference that this long-term trend was caused by the steady orbitally driven reduction in summer insolation. The cooling trend was reversed during the 20th century, with four of the five warmest decades of our 2000-year-long reconstruction occurring between 1950 and 2000.


The paper, however, does not make any effort to point out that it is the tree-ring proxies alone which account for the dramatic, unpresedented spike upward in the 20th century. Fortunately, a corrected (10/09) spreadsheet containing all 23 proxies is available from the authors. I have subdivided the 23 proxies into the four categories of Ice core isotopes, Varves, Sediments, and Tree Rings. The flawed tree-ring data (including The Most Influential Tree in the World [and see below]) is shown in light blue. The 10 period moving average of each category is shown in the same color as each category. 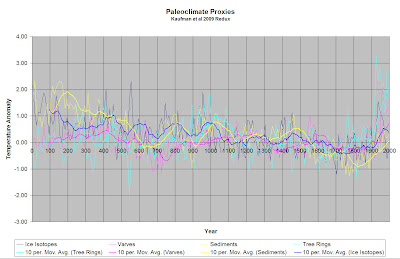 Instead of making it clear that (highly suspect) tree-ring data was alone distoring the average of the 23 proxies, the lead author of the paper stated to BBC News "The 20th Century stands out in strong contrast to the cooling that should have continued. The last half-century was the warmest of the 2,000-year temperature record, and the last 10 years have been especially dramatic." The BBC News in turn ran the alarmist headline Arctic 'warmest in 2,000 years' with the graph below (a simple average of all 23 proxies): 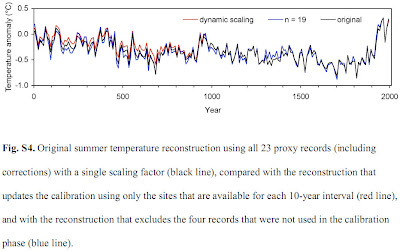 With these corrections, the arctic is apparently the same temperature as 2000 years ago. Still waiting for the corrected headlines from the BBC and other mainstream media that loved the original headline. Tick...tock...(queue crickets)...

Here is a prime example of the flawed Briffa tree-ring data using "The Most Influential Tree in the World": 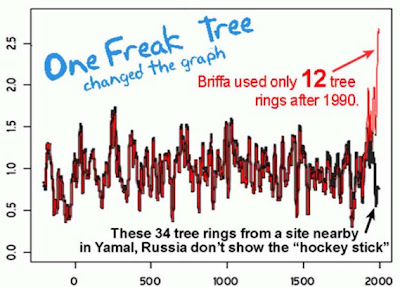