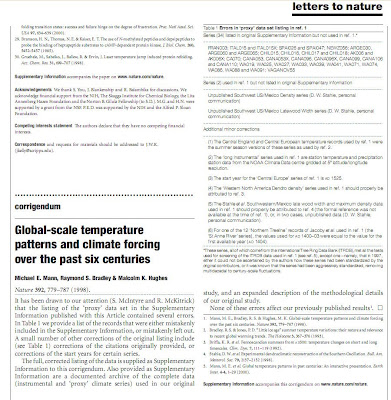 This is the "corrigendum" (a fancy word for "correction") Michael Mann was forced to publish with respect to his discredited "hockey stick" paper originally published in NATURE 4-23-98, after McIntyre and McKitrick published critical analyses. His pseudo-correction fails to acknowledge the serious flaws which completely contradict the core finding of the paper of unprecedented recent global warming. Instead, Mann again incorrectly concludes in the pseudo-correction that "None of these errors affect our previously published results."