Using the Pacific Marine Atlas program to plot data from the ARGO global network of 3222 free drifting ocean floats with GPS (data first became available from this program in 2004-see float locations below) shows a slight downtrend in Sea Height over the past six years ( Jan 2004 - November 2009) using data from the entire network: 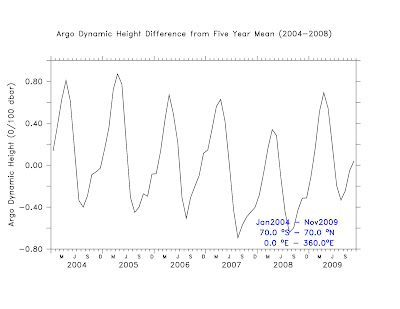 (Prior to the use of satellites and GPS, sea levels were determined with error prone methods such as use of wooden poles stuck in mud of the sea floor along coastlines, subject to sinkage into the mud, rotting poles, tilting of poles, and shift of tectonic plates, which may account for some of the uptrend in older data.)

Temperature (from the surface to 100 dbar depth) data from the same network also shows no trend over the past 6 years (graph below). Needless to say, the oceans represent 75% of the earth's surface and are not subject to urban heat effects that distort the land-based temperature record. The oceans also hold ~100 times the amount of heat held by the atmosphere. 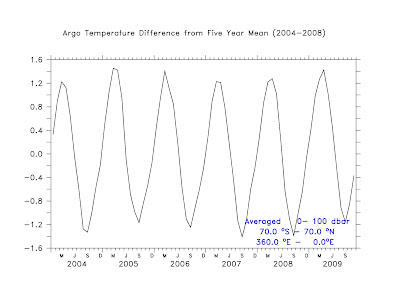