No rise of CO2 fraction over past 160 years

Research just published in Geophysical Research Letters
To assess whether the airborne fraction is indeed increasing, Wolfgang Knorr of the Department of Earth Sciences at the University of Bristol reanalyzed available atmospheric carbon dioxide and emissions data since 1850 and considers the uncertainties in the data. In contradiction to some recent studies, he finds that the airborne fraction of carbon dioxide has not increased either during the past 150 years or during the most recent five decades

Is the airborne fraction of anthropogenic CO2 emissions increasing?

Several recent studies have highlighted the possibility that the oceans and terrestrial ecosystems have started loosing part of their ability to sequester a large proportion of the anthropogenic CO2 emissions. This is an important claim, because so far only about 40% of those emissions have stayed in the atmosphere, which has prevented additional climate change. This study re-examines the available atmospheric CO2 and emissions data including their uncertainties. It is shown that with those uncertainties, the trend in the airborne fraction since 1850 has been 0.7 ± 1.4% per decade, i.e. close to and not significantly different from zero. The analysis further shows that the statistical model of a constant airborne fraction agrees best with the available data if emissions from land use change are scaled down to 82% or less of their original estimates. Despite the predictions of coupled climate-carbon cycle models, no trend in the airborne fraction can be found. 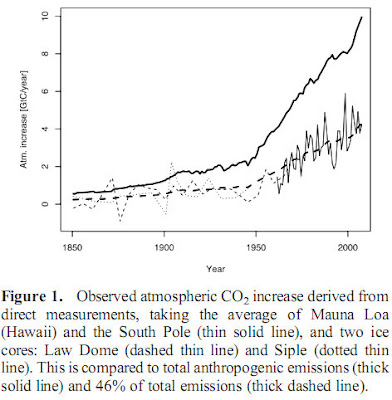 There are also serious concerns about the Siple ice core data in the graph above, which was artificially adjusted to match up with the Mauna Loa data. See the prior Hockey Schtick post The Other Hockey Schtick (CO2 Levels)