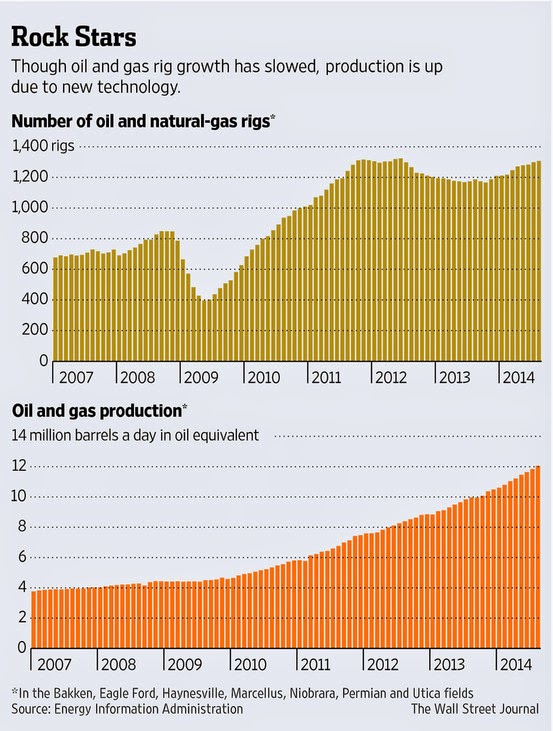 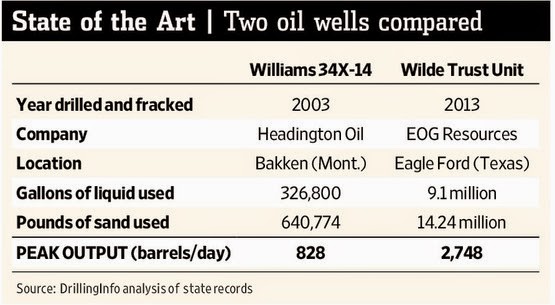 Skeptics of the U.S. energy boom say it can't last much longer because it requires drilling an ever-increasing number of wells.

But the boom already has lasted longer than anyone would have imagined just a decade ago and has more room to run. That's because oil and natural-gas wells have become more productive—an unrecognized but potent trend that should keep the fuels flowing.

Back in 2003, the energy industry had just begun combining the techniques of drilling horizontal bores through shale and then using hydraulic fracturing—shooting tons of water, chemicals and sand into the rocks.

Four Sevens Oil Co. drilled the best gas well that year, in the Barnett Shale, just north of Fort Worth, Texas, according to Drillinginfo, an industry data service that searched its records at the request of The Wall Street Journal.

Four Sevens used what was then considered a whopping 2.8 million gallons of liquid and 221,000 pounds of sand in fracking the well, named the Braumbaugh after the family that owned the mineral rights.

At its peak, 5.9 million cubic feet of gas a day rushed up the well. "We were real happy with it," says Four Sevens co-founder Dick Lowe. When the state published the production data, competitors were envious.

The well produced 30.3 million cubic feet a day—five times as much as the Four Sevens record setter a decade earlier.

"That's a pretty damn good well," Mr. Lowe says. "I might have dreamed of drilling a well that size."

The U.S. oil-and-gas industry no longer spends its time trying to find new shale formations to tap. Instead, it focuses on finding ways to get more out of the formations it has found. And it is succeeding.

As a result, the U.S. has become the world's largest energy producer, natural-gas prices have remained low and U.S. oil output has helped prevent rising crude prices around the world.
...
What's beyond dispute is that the newly drilled wells are better than the ones they are replacing.

The number of rigs drilling in the U.S. is basically flat, but production is rising. The federal Energy Information Administration calls this "drilling productivity" and says it is showing no sign of slowing.

Lynn Westfall, the EIA's director of energy markets and financial analysis, points out that the rig count in South Texas' Eagle Ford Shale "has not changed since 2012, but the production per new well has doubled."

Innovation makes the difference. The federal government recently predicted that oil production would rise through 2019 and then flatten off. But a second scenario in the report assumed that extraction technology would continue to improve, leading crude output to rise through 2040, if not longer.

The recent history of oil wells productivity is similar to that of gas wells.

In 2003, Headington Oil drilled an experimental well into the Bakken Shale in Montana near the North Dakota border. Headington, a private Dallas-area company, pumped in 326,000 gallons of liquid and used 640,000 pounds of sand. The well produced 828 barrels a day in October 2003.

Pat Smith, Headington's chief operating officer, says his approach back then was "to frack the heck out of it."

Turns out he didn't know from big fracks. EOG Resources Corp. last year drilled a well in the Eagle Ford Shale, using 30 times as much liquid. It also used 14.2 million pounds of sand. The result: 2,748 barrels a day.

Headington sold its Montana properties to XTO Energy Inc., now part of Exxon Mobil Corp. , for $1.8 billion in 2008. Founder Tim Headington took some of his earnings and bankrolled Hollywood movies, such as "Hugo" and "Rango."

Mr. Smith is still chasing oil and looking to drill in the Permian Basin. But first, he needs to get up to speed on modern fracking. "I have a big learning curve," he says.

Weak wells not fracking caused US gas leaks into water

By Matt McGrathEnvironment correspondent, BBC News   09/15/14A new study suggests that the contamination of drinking water by shale gas is due to faulty wells and not hydraulic fracturing.

Researchers in the US analysed the gas content in 130 water wells in Pennsylvania and Texas.

They were able to trace the methane found in the water to problems with the casing or lining of wells drilled to extract the gas.

The report appears in the Proceedings of the National Academy of Sciences.

In many parts of the US, the migration of gas into drinking water has raised questions about the fracking process.

Previous research has detailed the scale of these difficulties without arriving at a satisfactory explanation of how the gas got into the water.

This new study focussed on areas which were well known for elevated levels of methane in drinking wells.Noble experiment

The researchers used noble gases to trace the path of methane as these inert chemicals are not affected by microbial activity or oxidation.

By measuring the ratios of the noble materials to the methane they were able to accurately determine the distance to the likely source.

The scientists analysed content from 113 wells in the Marcellus shale in Pennsylvania and 20 in the Barnett shale in Texas. They found eight clusters of wells with problems.

"The mechanism of contamination looks to be well integrity," said one of the authors, Prof Robert Jackson from Stanford University.

"In about half the cases we believe the contamination came from poor cementing and in the other half it came from well casings that leaked."

Cement is used in the oil and gas extraction industry to fill the spaces between the well casing and the sides of the well.

In one case the methane was linked to the failure of an underground well. In none of the investigated wells was there a direct link to fracking.

"These results appear to rule out the possibility that methane has migrated up into drinking water aquifers because of horizontal drilling or hydraulic fracturing, as some people feared," said Prof Avner Vengosh, from Duke University.

The researchers are concerned that the wells are failing because of the large volumes of water going through them at very high pressure. This is a critical part of the process of extracting gas from the shale rocks.Separation of powers

They also point to the pressure that drillers are under to finish and move on to the next site. The historically low price of gas could also be affecting spending on well integrity as profit margins shrink.

The scientists believe that most of the problems they have identified can be resolved with better enforcement of existing regulations.

"You need generous setbacks that protect homes and schools and water sources from drilling, sometimes farther than the drillers would want. You need enough inspectors on the ground to keep people honest and you need separation between the industry and the inspectors and you don't always have that in the US."

Other researchers say that the latest work shows that the process of fracking is safe - and that with proper regulation it could be a viable proposition in countries like the UK.

"It's important to put this work into a UK/EU perspective," said Prof Quentin Fisher from the University of Leeds.

"The licensing system in the US means that companies have to drill a massive number of wells very quickly. This is not the case in the UK/EU so far more care can be taken to ensure that leakage into groundwater does not occur."

The researchers say that further work in this field could help them predict the likely path of methane if leaks occur in areas where fracking takes place.

Stanford publishes a report on the balanced use of fracking

Fracking Uses Less than 2% of Water and Recycling More

Community Advisory Board: Emotion overcomes facts in hydraulic fracking debate
Posted by MS at 8:59 AM