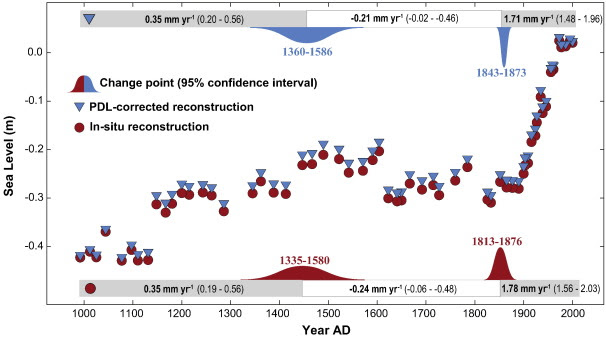 Salt-marsh sediments provide accurate and precise reconstructions of late Holocene relative sea-level changes. However, compaction of salt-marsh stratigraphies can cause post-depositional lowering (PDL) of the samples used to reconstruct sea level, creating an estimation of former sea level that is too low and a rate of rise that is too great. We estimated the contribution of compaction to late Holocene sea-level trends reconstructed at Tump Point, North Carolina, USA. We used a geotechnical model that was empirically calibrated by performing tests on surface sediments from modern depositional environments analogous to those encountered in the sediment core. The model generated depth-specific estimates of PDL, allowing samples to be returned to their depositional altitudes. After removing an estimate of land-level change, error-in-variables changepoint analysis of the decompacted and original sea-level reconstructions identified three trends. Compaction did not generate artificial sea-level trends and cannot be invoked as a causal mechanism for the features in the Tump Point record. The maximum relative contribution of compaction to reconstructed sea-level change was 12%. The decompacted sea-level record shows 1.71 mm yr− 1 of rise since AD 1845.
Posted by MS at 12:10 PM