The paper joins many other peer-reviewed publications in the literature describing solar amplification mechanisms, whereby tiny changes in solar activity have large-scale effects on global climate, and which are ignored by IPCC climate models.

Fig. 1. Result on the left panel compares the computed (red curve) annual rate of precipitation variability to the smoothed observed (blue curve) yearly homogeneous Indian summer monsoon rainfall (sum over all the four monsoonal rainy months of June-September) variability data (i.e., so-called ‘‘Parthasarathy’’ record obtained from the Indian Institute of Tropical Meteorology; the website is maintained by Rupa Kumar and colleagues, see Hiremath and Mandi (2004) for details of the data set) for the 1871 to 2005 interval. The simulated precipitation presented on the right panel is the same as left panel but the observed (combined data of North West and Peninsular India) rainfall is taken from Sontakke et al., 2008 (also obtained from the Indian Institute of Tropical Meteorology website). Error bar (¼ r=ðnÞ1=2, where r is standard deviation and n is number of 4 monthly points of the June-September rainfall) of the observed rainfall is computed from the summer monsoon rainfall data and those error bars are not shown on the ﬁgure in order to avoid the excessive crowding of data points and time series. The maximum values of the measurement error bars for two observational data sets are 48 mm and 53 mm, respectively. 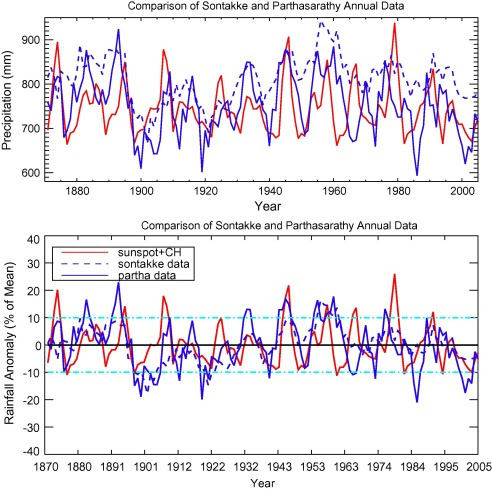 Fig. 3. Top panel: Same as Figs. 1 and 2, but both Parthasarathy’s and Sontakke’s data are over plotted on the simulated monsoon rainfall. The maximum values of the measurement error bars, not shown on the ﬁgure in order to avoid excessive crowding of data points, for both data sets are 48 mm and 53 mm, respectively. Bottom panel: Simulated and observed (both Parthasarathy and Sontakke) rainfall data from 1871 to 2005 plotted in percentage anomaly units also without the measurement error bars shown.

Indian summer monsoon rainfall: Dancing with the tunes of the sun

•
The purpose of this article is to find a physical linkage between solar activity and the summer monsoon rainfall.
•
Hydrodynamical equations are used to derive an equation for the rate of precipitation.
•
The equation for the rate of precipitation is similar to a forced harmonic oscillator.
•
Forcing variables are cloud and rain water mixing ratios.
•
Numerical solution captures very well the variability of Indian summer monsoon rainfall.

There is strong statistical evidence that solar activity influences the Indian summer monsoon rainfall. To search for a physical link between the two, we consider the coupled cloud hydrodynamic equations, and derive an equation for the rate of precipitation that is similar to the equation of a forced harmonic oscillator, with cloud and rain water mixing ratios as forcing variables. Those internal forcing variables are parameterized in terms of the combined effect of external forcing as measured by sunspot and coronal hole activities with several well known solar periods (9, 13 and 27 days; 1.3, 5, 11 and 22 years). The equation is then numerically solved and the results show that the variability of the simulated rate of precipitation captures very well the actual variability of the Indian monsoon rainfall, yielding vital clues for a physical understanding that has so far eluded analyses based on statistical correlations alone. We also solved the precipitation equation by allowing for the effects of long-term variation of aerosols. We tentatively conclude that the net effects of aerosols variation are small, when compared to the solar factors, in terms of explaining the observed rainfall variability covering the full Indian monsoonal geographical domains.
Posted by MS at 9:18 AM