WSJ: People's Climate Demarche: Climate lobby should explain 'hiatus' in warming that has lasted 16, 19 or 26 years


The anticarbon campaign stalls even at the United Nations.

Tens of thousands of environmental protestors paraded through New York City on Sunday, in a "people's climate march" designed to lobby world leaders arriving for the latest United Nations climate summit. The march did succeed in messing up traffic, but President Obama won't achieve much more when he speaks Tuesday at this latest pit stop on the global warming grand prix.

Six years after the failure of the Copenhagen summit whose extravagant ambition was to secure a binding global treaty on carbon emissions, Mr. Obama is trying again. The Turtle Bay gathering of world leaders isn't formally a part of the international U.N. climate negotiations that are supposed to climax late next year in Paris, but the venue is meant to be an ice-breaker for more than 125 presidents, prime ministers and heads of state to start to reach consensus.

One not-so-minor problem: The world's largest emitters are declining to show up, even for appearances. The Chinese economy has been the No. 1 global producer of carbon dioxide since 2008, but President Xi Jinping won't be gracing the U.N. with his presence. India's new Prime Minister Narendra Modi (No. 3) will be in New York but is skipping the climate parley. Russian President Vladimir Putin (No. 4) has other priorities, while Japan (No. 5) is uncooperative after the Fukushima disaster that has damaged support for nuclear power. Saudi Arabia is dispatching its petroleum minister. 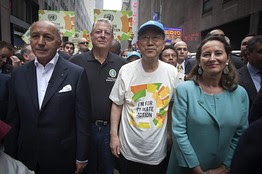 U.N. Secretary General Ban Ki-moon excused these truancies at a press conference last week: "In any event, we have other means of communications, ways and means of having their leadership demonstrated in the United Nations." In that case, why not do a conference call?

To understand the coldness of this brush off, global CO2 emissions increased to 35.1 billion metric tons in 2013, a new record and a 29% increase over a decade ago. Of the year-over-year carbon climb, China at 358 million metric tons jumped by more than the rest of the world combined and is responsible for 24.8% of emissions over the last five years. Over the same period, developing nations accounted for 57.5%.

What this means is that regardless of what the West does, poorer countries that are reluctant to sign agreements that impede economic progress hold the dominant carbon hand. No matter U.S. exertions to save the planet from atmospheric carbon that may or may not have consequences that may or may not be costly in a century or more, the international result will be more or less the same, though U.S. economic growth will be slower.

Mr. Modi is unlikely to indulge the rich world's anticarbon politics when a quarter of the Indian population still lacks electricity. Mr. Obama might also pause to reflect that 30.6% of the 114.8 American households qualify for low-income energy subsidies. Thus by the Administration's own reckoning they can't afford current energy costs, much less the higher costs of a zero-carbon future.

In his first speech as White House budget director, Shaun Donovan nonetheless told the Center for American Progress on Friday that "the scale of our ambition at home is going to be the single most important driver" for climate action by China and other nations. In fact, the costly anticarbon regulations that the Environmental Protection Agency is developing will by the EPA's estimate address a mere 0.18% of world-wide carbon emissions. Some effort in persuasion.

This reality has now led more than a few climateers to claim that decarbonizing the economy will be magically cost-free. Mr. Donovan lectured that "climate denial will costs us billions of dollars," as a hotter planet reduces GDP and drives up deficits, while natural disasters like coastal superstorms impose new relief costs on the federal fisc.

So the problem is so dire that we must impose huge new costs on carbon and energy production, but don't worry—you won't feel a thing. The government will create all new energy industries and wealth in a seamless transition. Caveat emptor: Supposedly professional economists who promise that scarce resources can be made scarcer at zero cost have stopped practicing economics. They have become politicians, if not as honest.

Rather than debasing economics, perhaps the climate lobby should return to the climate science and explain the hiatus in warming that has now lasted for 16, 19 or 26 years depending on the data set and which the climate models failed to predict even as global carbon dioxide emissions have climbed by 25%. Their alibi is that the new warming is now hidden in the oceans, an assertion they lack the evidence to prove.

The campaign to redo the global energy economy has produced plenty of spectacle (the activists in Manhattan), contempt for democratic norms (the EPA), and the promise of a less prosperous future (Germany's renewable fuels fiasco). But perhaps Mr. Modi has a better sense of priorities because while in New York he plans to attend a Central Park event on the theme of reducing global poverty as well as the 9/11 memorial that is a reminder of the renewed threat of terrorism.