A new paper published in the Journal of Physical Oceanography compiles "high-resolution measurements of ocean mixing collected over the past three decades to reveal how deep ocean waters return to the surface - a process that helps to regulate Earth's climate" via ocean oscillations such as the Atlantic Meridional Overturning Circulation [AMOC], and other natural ocean oscillations.

The paper discusses dissipation of ocean heat due to turbulence and mixing, which is a substantial 0.4 * 10^12 Watts [Terawatts] necessary to continuously lift dense bottom waters to the ocean surface, generated from a total of ~2 Terawatts potential energy from large internal ocean waves that mix bottom waters back to the surface.

The large amounts of ocean heat content that is dissipated by these "missing mixing" processes results in heat lost to potential energy and turbulence, thereby decreasing the ability of the oceans to warm from any source, including greenhouse gases. The oceans additionally cannot warm from greenhouse gases due to a number of other physical reasons, explaining why at least 93% of Trenberth's "missing heat" is missing from the oceans [in addition to 100% of Trenberth's heat missing from the atmosphere].

Further, dissipated ocean heat and potential energy can not pop out of the oceans and say "Boo!" without violating the 2nd Law of Thermodynamics principle of maximum entropy production. The oceans have warmed only a tiny 0.09C over the past 55 years, and even if that could violate the laws of thermodynamics to pop out and heat the atmosphere, the maximum it could heat the atmosphere is limited to 0.09C. 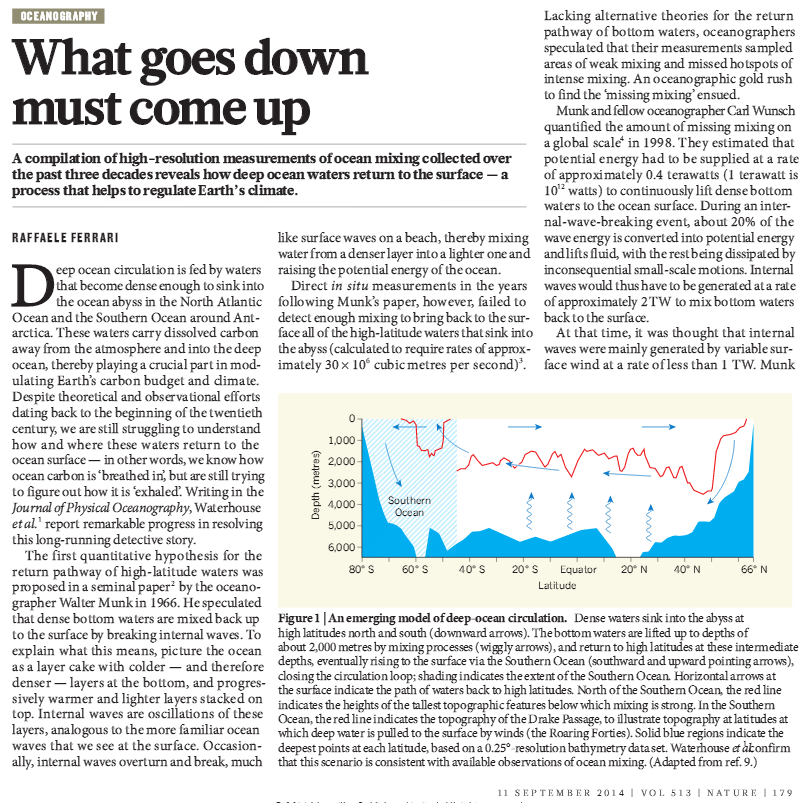 * Scripps Institution of Oceanography, University of California, San Diego, La Jolla, California
+ College of Oceanic and Atmospheric Sciences, Oregon State University, Corvallis, Oregon
# Applied Physics Laboratory and School of Oceanography, University of Washington, Seattle, Washington
@ University of Alaska Fairbanks, Fairbanks, Alaska
& Department of Physical Oceanography, Woods Hole Oceanographic Institution, Woods Hole, Massachusetts
** Department of Oceanography, University of Hawai‘i at Mānoa, Honolulu, Hawaii
++ Geophysical Institute, University of Bergen, Bergen, Norway
## Department of Earth, Ocean and Atmospheric Sciences, University of British Columbia, Vancouver, British Columbia
&& National Oceanography Centre, University of Southampton, Southampton, United Kingdom
The authors present inferences of diapycnal diffusivity from a compilation of over 5200 microstructure profiles. As microstructure observations are sparse, these are supplemented with indirect measurements of mixing obtained from (i) Thorpe-scale overturns from moored profilers, a finescale parameterization applied to (ii) shipboard observations of upper-ocean shear, (iii) strain as measured by profiling floats, and (iv) shear and strain from full-depth lowered acoustic Doppler current profilers (LADCP) and CTD profiles. Vertical profiles of the turbulent dissipation rate are bottom enhanced over rough topography and abrupt, isolated ridges. The geography of depth-integrated dissipation rate shows spatial variability related to internal wave generation, suggesting one direct energy pathway to turbulence. The global-averaged diapycnal diffusivity below 1000-m depth is O(10−4) m2 s−1 and above 1000-m depth is O(10−5) m2 s−1. The compiled microstructure observations sample a wide range of internal wave power inputs and topographic roughness, providing a dataset with which to estimate a representative global-averaged dissipation rate and diffusivity. However, there is strong regional variability in the ratio between local internal wave generation and local dissipation. In some regions, the depth-integrated dissipation rate is comparable to the estimated power input into the local internal wave field. In a few cases, more internal wave power is dissipated than locally generated, suggesting remote internal wave sources. However, at most locations the total power lost through turbulent dissipation is less than the input into the local internal wave field. This suggests dissipation elsewhere, such as continental margins.
Posted by MS at 11:13 AM