One day after Gavin Schmidt, the NASA/GISS director and award-winning climate communicator, told the press and made headlines proclaiming August 2014 was the "warmest August on record," NASA/GISS has quietly changed the data [without telling the press] and now shows August was cooler than 2011 by 0.02°C, and a 0.68°C total anomaly since the 1951-1980 mean. StevenGoddard.wordpress.com points this out and shows how Gavin et al have erroneously extrapolated data over the poles to achieve this in the excerpts from posts below, and also shows the RSS satellite data indicates the globe was inconveniently much warmer during August 1998 than August 2014.

In addition, Gavin's August 2014 anomaly map as of today shows the coldest and warmest anomalies on the planet are only separated by two 2° grid boxes (about 111 km per 1° or a total of only ~444 km). These two extreme cold/warm anomalies in Antarctica are indicated by the arrows below and correspond to a cold anomaly from -4 to -4.6C and a warm anomaly of +4 to +8C, thus a difference between the two of between 8C to 12.6C, over a mere ~444 km distance [276 miles].

A Closer Look At Record August Fraud From NASA

Posted on September 15, 2014by stevengoddard
August was cool in the US, western Europe, southern Asia, parts of Siberia, Australia, Africa, South America, Antarctica and the Arctic. It was the first or second coldest summer on record north of 80N.
And NASA says it was the hottest August ever. 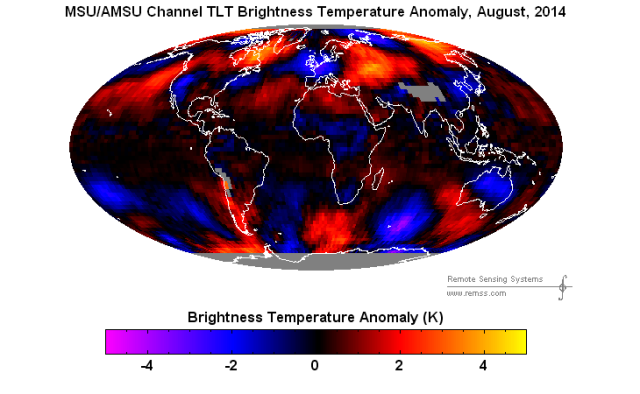 Compare vs. August 1998, when almost the whole world was hot. 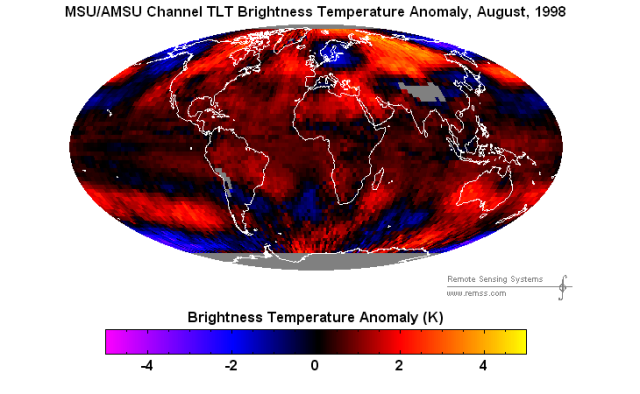 August 2014 Is No Longer The Hottest On Record

Posted on September 16, 2014by stevengoddard

Yesterday, Gavin told the Huffington Post that August was the hottest on record globally. He seems to have changed his mind since then, because today his map shows August was cooler than 2011 by 0.02 degrees.

RSS shows that August was seventh coolest and below average since 1997. So how did Gavin create his since reversed scientific flustercluck?
There were three stations in Antarctica on the right side of the 250 km map below which he marked as very hot. Those three stations averaged about -20C. This map has 250km extrapolation, and gives a feel for where the stations are located, and where there is no data.

He extrapolated those three -20C Antarctic stations across a huge area of below normal  temperatures on both the lower right and lower left side of the map, and massively skewed his global average anomaly using a large area of fake +6C anomaly, which he declared hot at -20C.  This map shows Gavin’s 1200 km extrapolations to smear the earth with non-existent warm data.

There are all kinds of other things he did wrong, including filling in Africa and South America with fake warm data, when RSS showed them cold. Problems with Australia too, which RSS showed cold.
Now lets look at Gavin’s abuse of the Arctic. DMI showed the area north of 80N as first or second coldest on record. Gavin had no data north of 80N, but filled it in with hot data,

In summary, the claim of record heat has since been disproven by his own data, and was based largely on fake, cold data at the poles – which he declared to be hot.
How could Antarctica have been hot? They have record sea ice extent, indicating the winds are blowing away from the pole, towards the coast.

Something Else That Doesn’t Make Sense

Posted on September 16, 2014by stevengoddard
This is today’s version of GISS divergence from RSS graph. Normally during El Nino the gap closes, because the atmosphere warms more than the surface.. This year’s mini-El Nino has done the opposite.