Yet another broken hockey stick paleoclimate reconstruction passed over by the IPCC for AR4 comes from the 2001 paper Briffa KR, Osborn TJ, Schweingruber FH, Harris IC, Jones PD, Shiyatov SG and Vaganov EA (2001) Low-frequency temperature variations from a northern tree-ring-density network. Journal of Geophysical Research 106, 2929-2941. This example was found at a blog posting McClimategate continues: Yet another false accusation from McIntyre and McKitrick, an amusing "explanation" of one of several infamous Briffa/Osborn climategate FUDGE factor programs which "APPLIES A VERY ARTIFICIAL CORRECTION FOR THE DECLINE" (briffa_sep98_e.pro is only one of the climategate programs with so-called FUDGE factors). The author of the blog posting has no idea if one of said FUDGE factor programs applied to this paper or any other paper, but thinks Osborn's explanation makes sense:


...I had applied an adjustment to this particular set of data (for the purposes of exploring the consequences of recent trends for the calibration of tree-ring temperature proxies) and that if I did plot them it would give a false impression of the agreement between tree-rings and temperature because of the adjustment.


In other words, Osborn had used FUDGE factors to flatten the past and steepen the recent tree-ring temperature proxy to explore how nicely the tree-rings would agree with the thermometers, if there wasn't that annoying "divergence problem" after 1960, and how unprecedented the 20th century temperature proxy would look in comparison to the past. Begs the question, why is there any scientific basis to waste valuable time exploring FUDGED data with VERY ARTIFICIAL CORRECTIONS?

The blog post then proves that there is no way Briffa, Osborn, et al ever used a FUDGE factor in any publication, at least not on this particular graph in this particular paper, by showing this tree-ring temperature proxy: 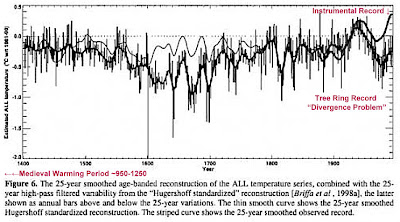 (notations in red added)
The reason of course being that the tree-ring proxy really shows the 1940's to be by far the hottest part of the 20th century, yet even the 1940's were by this proxy as hot as ~1800 and ~1500, and the Medieval Warming Period (which hundreds of paleoclimate studies find to be hotter than the present) is not even shown. Once again the so-called "divergence problem" rears it's ugly head, with the tree-rings not cooperating with the instrumental (thermometer) record and taking a dive after the 1950's, but according to the blog posting:

the paper also states the proxy data for many chronologies after 1960 was unreliable and should not be used for calibration; this period was also excluded for the various cross-comparisons between regional chronologies and with other reconstructions:

The period after 1960 was not used to avoid bias in the regression coefficients that could be generated by an anomalous decline in tree density measurements over recent decades that is not forced by temperature[Briffa et al., 1998b].

This is scientific nonsense. If the tree rings weren't reliable thermometers after 1960, then they can not be considered to be reliable thermometers prior to 1960, no matter how much obfuscated language and unproven theories are used. Secondly, even if the trees were good thermometers prior to 1960, the reconstruction shows the temperature to be as hot or hotter than 1960 multiple times in the past and therefore shows there is no unprecedented anthropogenic rise in temperature. Thirdly, there is the never discussed Y-axis problem, wherein nobody knows where to graft the instrumental record relative to the tree-ring record. The above graph could have started the instrumental record at a temperature anomaly of -1 degree and then the latter half of that record would match up with the tree-rings from 1960 onward and the "divergence problem" would have been from 1900-1960 instead of 1960-2000. This makes just as much sense as what Briffa et al have done, although neither is appropriate.
Posted by MS at 8:28 AM