It's Deja Vu all over again, but this time the highly questionable "adjustments" are not to temperature records, but to satellite sea level altimetry data. A publication at the EPA website called SEALEVEL_FINAL.PDF, has a graph of TOPEX/JASON sea level rise circa 2005 (see notation in lower left of blink chart) on page 7. The 2005 version of the data is no longer available online, but comparing to the current version online shows:

The AVISO website has the following graph of the TOPEX data 1993-1998 to illustrate that the record El Nino in 1997-1998 had a significant effect on the global mean sea level: 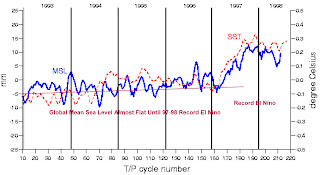