Arctic has still not received the memo on AGW

Arctic temperatures stable since 1958
From the Copenhagen Centre for Ocean and Ice of the Danish Meteorological Institute, which has maintained daily mean temperatures (untouched by Phil Jones & CRU) for the Arctic area north of the 80th northern parallel since 1958, the critical summer temperatures (the peak in the middle of the graphs) shows that the summer arctic temperatures were stable to considerably less for the summer of 2009 compared to the summer of 1959 (& 1958 and indeed most years in the record). The temperatures for the summer of 2009 were also stable to considerably less than the ~50 year mean shown in green, and at or below the critical ice melting point of 273.15K (0°C) shown in blue during the first month of the summer. Before anyone accuses me of cherry-picking, go to the DMI website yourself and look at all the graphs from 1958-2009 and you will find absolutely no increasing trend in arctic summer temperature, as is also evident from the mean shown as the green line.

(X axis is the day of the year)
This is in spite of the fact that the effects of AGW (Anthropogenic [man-made] Global Warming) are supposed to be the most pronounced at the poles. As Dr. Richard Lindzen noted in his talk at Fermilab, the winter temperatures at both ends of the graphs show tremendous variability due to turbulent eddies or storms transporting heat from lower latitudes, but there is no overall trend in the arctic winter temperatures either. Temperatures below the blue line indicating freezing temperature obviously aren't going to have any effect on arctic ice melt. Winter arctic sea ice extent has just peaked at the highest levels since the Centre for Ocean and Ice began measurement in 2005. Dr. Lindzen shows examples of the same arctic temperature graphs from the DMI Centre for Ocean and Ice and notes 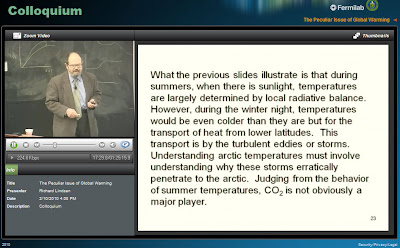 In other words, if an increased-CO2-greenhouse-forcing was causing global warming as the IPCC models predict, the fingerprint would be most apparent in the summer arctic temperatures (when there is sunlight 24 hours a day to produce a greenhouse effect-there is no sunlight in the arctic during winter). Since CO2 has steadily climbed since 1958, yet arctic summer temperatures have not changed, CO2 is obviously not a major player in arctic temperatures.
Other related slides from Dr. Lindzen's talk: 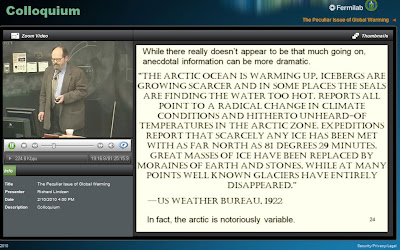 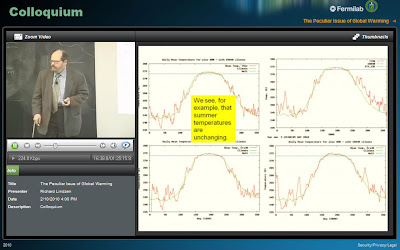 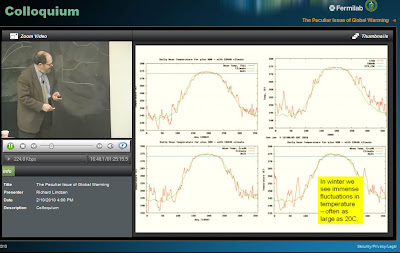 Temperature data from NASA/GISS longest-running Greenland weather station (and others below): 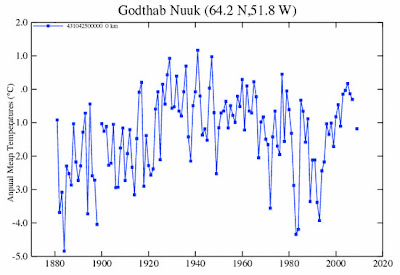 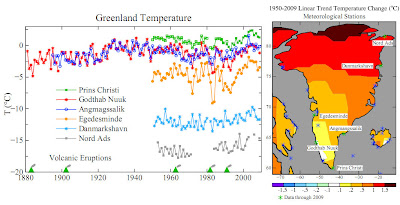 But here's what NASA/GISS shows on their website for the public as the global temperature anomalies 1881-2009: 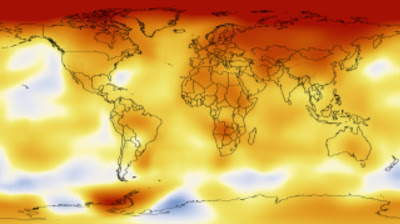 with the most pronounced warming obviously in the Arctic, in stark contrast to the DMI data and the NASA/GISS Greenland Godthab weather station (graphs above, which is the only station in operation for Greenland during the entire 1881-2009 period)(the second longest running Antarctic station Angmagssalik also shows no significant change in temperature 1895-2009).

Related article on the "arctic hole":


The global temperature-monitoring network consists of 517 weather stations. But each reading is only a tiny dot on the big world map, and it has to be extrapolated to the entire region with the help of supercomputers. Besides, there are still many blind spots, the largest being the Arctic, where there are only about 20 measuring stations to cover a vast area. Climatologists refer to the problem as the "Arctic hole."