Professor Julia Slingo OBE, Chief Scientist, Met Office UK in answering a question as to why the land based temperature data record has shown higher temperature anomaly than the two satellite records explains that the reason is that satellite data is "an order of magnitude" (10 times) less accurate than the land based thermometer data [you know those thermometers in little latex-painted boxes at the end of aircraft runways and in cities]. She dismisses the urban heat effect by saying "we've looked at it" and says the issues with the Mann Hockey Stick have been "resolved" without mentioning that it has been discredited. Truly a piece of work as are the other apologists. 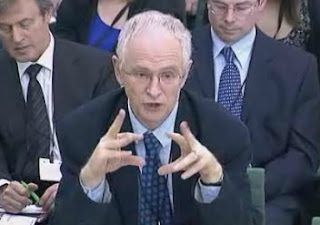 Phil Jones holding all of the scientific evidence of AGW

Don't miss the first part of the hearing discussing the Mann Hockey Stick as "fraudulent" and Mike's Nature Trick as a deliberate deception intended to hide the decline. Professor Phil Jones trembles and hands shake throughout his testimony as he evades answering questions. Good summary of the hearing at Bishop Hill.


Many of the Memoranda to this meeting make for good reading including McIntyre's and this from Peabody Coal Co:


The fact is that we can't account for the lack of warming at the moment and it is a travesty that we can't. The CERES data published in the August BAMS 09 supplement on 2008 shows there should be even more warming: but the data are surely wrong. Our observing system is inadequate.[27]


18. Or perhaps both. It is, moreover, particularly relevant that Trenberth stated that "[t]he fact that we can not account for what is happening in the climate system makes any consideration of geoengineering quite hopeless as we will never be able to tell if it is successful or not!" Trenberth's reference to "geoengineering" here includes reducing GHG emissions.[28] In other words, Trenberth stated that the flaws in the climate community's understanding of climatic forces that are exposed by the lack of warming is so fundamental - and the extent of natural variability must be so great - that it cannot be demonstrated that reducing GHG emissions will reduce warming.

Abject Lack of Transparency
19. The CRU materials also show a determined effort to stonewall attempts by third parties to obtain basic information underlying the scientific studies that were used in the IPCC reports. A considerable volume of transatlantic email traffic between the CRU scientists and their American counterparts was devoted to figuring out strategies to avoid producing information that could be used to critique their work, even when the information was requested under the American or United Kingdom Freedom of Information Acts ("FOIA").[29]
20. The emails reveal that these scientists refused to disclose information that would allow their studies to be replicated and critiqued because they saw themselves in a battle with "skeptics" who they considered to be "bozos" and "morons" and perpetrators of fraud.[30] They appeared to be particularly concerned that putting their information in the public domain would expose their work to criticism. As Jones said in one now-famous email, "We have 25 years or so invested in the work. Why should I make the data available to you, when your aim is to try and find something wrong with it?"[31] Jones' view was echoed by Mann. As Jones reported, "Mike Mann refuses to talk to these people and I can understand why. They are just trying to find if we've done anything wrong."[32]
21. Indeed, concern over communications these scientists had had concerning the drafting of AR4 was so great that they mutually agreed to destroy those communications in order to avoid disclosure under FOIA. Thus, on May 29, 2008, Jones sent an email to Mann under the subject line "IPCC & FOI," asking that Mann delete his emails with Briffa and advising that he would make the same request to Eugene Wahl and Caspar Amman. Wahl and Amman co-authored a paper that attempted to rehabilitate the hockey stick. As shown in the Petition, publication deadlines were improperly manipulated in order to include the paper in AR4.[33] Jones wrote:
Can you delete any emails you may have had with Keith re AR4? Keith will do likewise. He's not in at the moment - minor family crisis. Can you also email Gene and get him to do the same? I don't have his new email address. We will be getting Caspar to do likewise.[34]


22. Later in the same thread, Mann responded to Jones that he would "contact Gene about this ASAP."[35] Several months later Jones reported that he had in fact "deleted loads of emails."[36] One is forced to wonder what damaging admissions were made in these now-deleted emails concerning how AR4, in fact, was prepared.
23. After the efforts of these scientists to stonewall data requests were exposed to public scrutiny through FOIA and now through release of the CRU material, many of them were forced to admit that their actions were not in the best interests of science. Wigley told Briffa that "many *good* scientists appear to be unsympathetic" to the reasons advanced for the stonewalling.[37] Overpeck wrote in relation to one information request that "it would be nice if he could have access to all the data that we used-that's the way science is supposed to work."[38] And now John Beddington, the British government chief scientific adviser, has recently said, "I think, wherever possible, we should try to ensure there is openness and that source material is available for the whole scientific community."[39]
Publication Abuses
24. The CRU scientists and their American colleagues engaged in a variety of practices to manipulate the peer-reviewed literature to favor publication of papers that supported their views and to discourage publication of papers that contradicted their views. As Mann told a New York Times reporter, "[a] necessary though not in general sufficient condition for taking a scientific criticism seriously is that it has passed through the legitimate scientific peer review process."[40] That being the case, these scientists took steps to ensure that "skeptics" did not have access to peer-reviewed literature.[41]
25. For instance, enraged that the journal Climate Research had published a paper presenting evidence that the MWP was global and as warm as today, these scientists discussed organizing a boycott to strong-arm the journal board into firing the offending editor. Jones wrote that the journal needed to "rid themselves of this troublesome editor."[42] Wholesale changes ensued at the journal.[43] Similar action was taken at Geophysical Research Letters after publication of an offending letter. Mann reported back to his colleagues that the problem had been solved: "[t]he GRL leak has been plugged up with new editorial leadership there,"[44] as if the appearance of a paper that did not support their view of the science was a "leak" in the peer-reviewed journalistic community that had to be "plugged."[45]
Conclusion
26. Dr. Briffa had it exactly right when he reported to his colleagues that "the needs of the science and the IPCC" "were not always the same." In fact, the IPCC process has been revealed to be as much about advocacy as about science. And the CRU material is only one thin slice of information concerning the drafting of the TAR and AR4. It seems that every day new revelations appear about flaws in the accuracy of the IPCC's conclusions and in the process that was used to select information that would, and would not, be included in the reports.