"How has the climate changed over the past 50 or more years? In what ways and by how much? Many people, including climatologists, have been struggling with these questions for some time now, not only for scientific interest, but also to aid in policy decisions (IPCC 2001) and to inform the general public. In order to answer these questions, it is important to obtain comprehensive and intuitive information which allows interested parties to understand the scientific basis for confidence, or lack thereof, in the present understanding of the climate system. One tool, first developed as a framework for quantifying observed changes in climate within the contiguous Unites States, is the U.S. Climate Extremes Index (CEI).


The CEI was first introduced in early 1996 (Karl et al. 1996) with the goal of summarizing and presenting a complex set of multivariate and multidimensional climate changes in the United States so that the results could be easily understood and used in policy decisions made by nonspecialists in the field. The contiguous U.S. was selected as the focus for this study in part since climate change is of great interest to U.S. citizens and policy makers and since climate changes within the U.S. have not been given extensive coverage in intergovernmental or national reports which focus on climate change assessments (IPCC 2001; NRC 1992; NRC 2001)." (emphasis added) 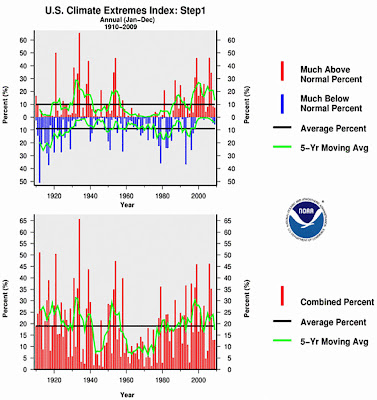 The other components of the CEI include minimum temperatures, droughts, precipitation, and storm activity as noted on the website, but will not be discussed in this post. The second chart combines the positive and negative anomalies and is easier to interpret. The chart shows US Maximum Temperature Extremes Index 5 year moving average currently less than the 99 year mean and that the 1997-1998 record El Nino period was matched or exceeded 3 times in the distant past. Where is the warming? Thanks to this index, I think I now "understand the scientific basis for confidence, or lack thereof, in the present understanding of the climate system."

Hansen & Co have 99% confidence in AGW given that by their recent analysis in a 3/19/10 draft paper, their latest massaged version of the US Temperature anomaly (mean temps not an index of max temperature extremes above) 5 year mean shows a peak in 1999 a mere 0.16°C above that of the 1930's, despite the inconvenient truth that the CO2 level has risen during that period from ~310 to 389 ppm: 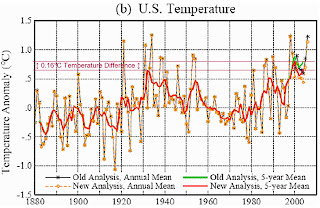 (red horizontal lines added to show differences in 5 year mean peaks)
According to the IPCC Climate Computer, this change in CO2 levels should have caused a temperature rise of 1.07°C assuming the IPCC imaginary positive feedbacks. That prediction is only off track by a factor of 7. The current 5 year mean is also the same as the peak in the 1930's, but Hansen concludes that the recent unprecedented peak (in 1999) is due to anthropogenic CO2 (only 3.5% of total CO2) while ignoring the inconvenient peak in the 1930's. Yes, the US is not the whole globe, but does have one of the densest networks of temperature stations, flawed as they may be, and higher anthropogenic emissions of CO2 over this period than most of the rest of the globe.
Posted by MS at 11:49 AM