Plotting the global mean sea level (MSL) trends (from multi-satellite mission data) over almost 17 years from Oct 1992 - July 2009 shows a decrease in mean sea levels along most of the west coast of North & South America of approximately 50 mm or 5 cm during that period. 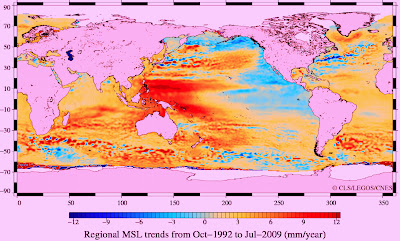 (Above graph was created by using photoshop neutral color picker on the original graph below from the satellite data browser to alter color scaling for clarity of positive and negative trends). 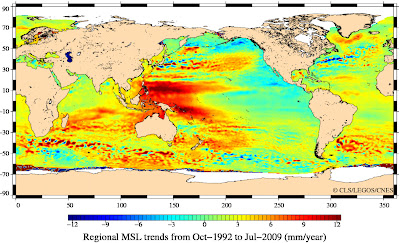 The plots show most of the sea level rise was concentrated in the equatorial Pacific region where periodic El Nino and La Nina events raise ocean temperatures and regional sea level (large red area in graph). Small increases of 1 mm - 3.5 mm/yr are found at most other coastal regions during the period. Indeed, the AVISO site notes


Mean rise in sea level is only part of the story...The rise in the level of the oceans is far from uniform. In fact, while in certain ocean regions the sea level has indeed risen (by up to 20 millimeters a year in places), in others it has fallen an equivalent amount. Although the global trend indicates a rise in the mean level of the oceans, there are marked regional differences that vary between -10 and 10 mm/year...Isolated variations in MSL are thus revealed, mainly in the major ocean currents.

El Niño is behind rise in Mean Sea Level 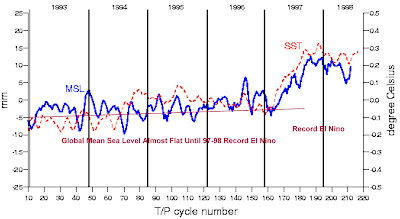 Global Mean Sea Level (MSL, blue line) and Sea Surface Temperature (SST, red dotted line) from early 1993 to mid-1998. In 1997 there was a rise of 15 mm at the start of the largest El Nino of the 20th century. The meteorological effects of El Niño 1997-1998 were felt worldwide, but it also contributed to variations in mean sea level. Indeed, sea level anomalies measured by Topex/Poseidon were over 20 centimeters in the equatorial Pacific when the phenomenon was at its height (and as much as 30 centimeters off the coast of Peru). These anomalies obviously had an effect on the global mean of sea levels.

Interesting that as the Pacific Ocean recovers from the record 1997-1998 El Nino and three smaller El Ninos since, and the Pacific Decadal Oscillation has entered a negative phase, we find that global sea level per ARGO+GRACE shows declining global sea levels 2004-2009.

Epilogue: James Hansen's prediction of sea level rise of 5 meters by 2100 seems a tad off trend. UPDATE: Hansen increased his prediction to 75 meters in 2009 editorial. The decreasing sea levels along the west coast of North America show Al Gore made a wise purchase of a $4.5 million dollar condo in San Francisco in the part of the city An Inconvenient Truth showed would be submerged.
Posted by MS at 6:58 PM