Sea Level Change over the past 120 million years: (note Y axis is inverted for sea levels with lower sea levels shown as higher on Y axis on the following 2 graphs) 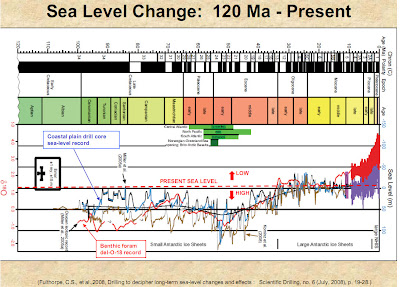 During most of the past 120 million years, sea levels have been 50-100 meters higher than the present. Sea levels dropped ~130 meters below the present during the last ice age and have risen since then throughout the current interglacial, but at a much slower rate over the past 7000 years & had almost no change over the past 2000 years according to paleological studies (see below).


Sea Level Change over the past 70 million years: 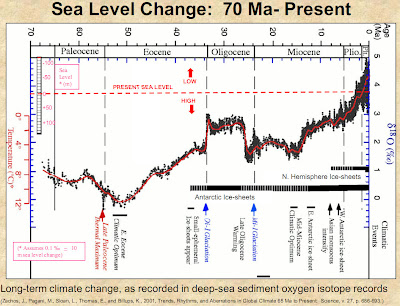 Sea Level Change over the past 1 million years: 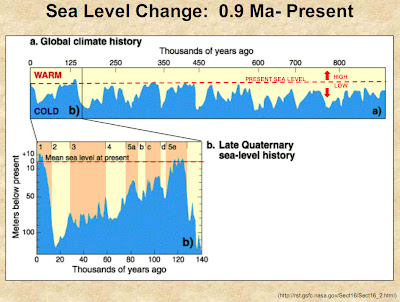 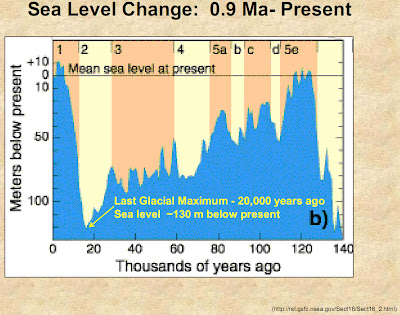 Sea level varied by over 100 meters during glacial-interglacial cycles as the major ice sheets waxed and waned as a result of changes in summer solar radiation in high northern hemisphere latitudes. Paleo data from corals indicate that sea level was 4 to 6 meters (or more) above present day sea levels during the last interglacial period, about 125,000 years ago. Climate and ice-sheet model simulations indicate that Greenland was about 3°C warmer than today and that the Northern Hemisphere ice sheets contributed 2.2 to 3.4 metres to the higher sea level, with the majority of the rise coming from the partial melting of the Greenland ice sheet.
During the last ice age, sea level fell to more than 120 meters below present day sea level as water was stored in ice sheets in North America (Laurentian, Cordilleran), Greenland, northern Europe (Fennoscandia and the Barents region) and Antarctica. As the ice melted, starting around 20 000 years ago, sea level rose rapidly at average rates of about 10 mm per year (1 m per century), and with peak rates of the order of 40 mm per year (4 m per century), until about 6000 years ago when they started to level off. Sea level rose much more slowly over the past 7,000 years. The sea level 2,000 years ago can be deduced by (for example) examining fish tanks built by the ancient Romans. Because the tanks had to be at sea level for the sluice gates to function, we can precisely estimate sea level during the period of their use. Comparison of this level with historical records indicates that there has been little net change in sea level over the past 2000-6000 years.
A number of other data types are used to estimate sea level over preceding ages. Some of them are: 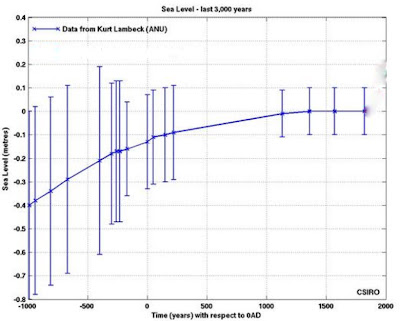 Ancient Roman fish tanks ("Piscinae") give an accurate indication of sea level in this area around 2,000 years ago. From Kurt Lambeck, Australian National University

Other studies of sea level of the Gulf of Mexico show a similar stabilization over the past 6000 years and much faster sea level rises at the start of the current interglacial: 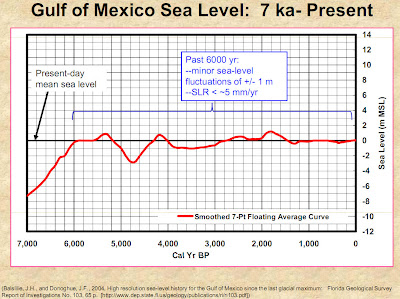 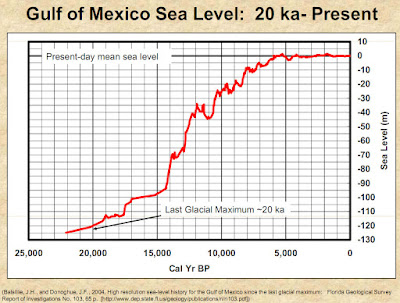 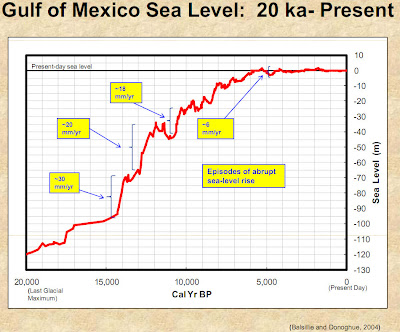 Related: Tasmanian Sea Levels: The `Isle of the Dead' Revisited by John L. Daly and followup (side note John Daly is deceased, which was "cheering news" to Phil Jones in one of his "awful" climategate emails).


"Sea level is rising," Giegengack agrees, switching off the sound. But, he explains, it's been rising ever since warming set in 18,000 years ago. The rate of rise has been pretty slow — only about 400 feet so far. And recently — meaning in the thousands of years — the rate has slowed even more. The Earth's global ocean level is only going up 1.8 millimeters per year. That's less than the thickness of one nickel. For the catastrophe of flooded cities and millions of refugees that Gore envisions, sea levels would have to rise about 20 feet.

"At the present rate of sea-level rise," Gieg says, "it's going to take 3,500 years to get up there. So if for some reason this warming process that melts ice is cutting loose and accelerating, sea level doesn't know it. And sea level, we think, is the best indicator of global warming."