Global Warming Consensus Reaches 130% with -50% Against 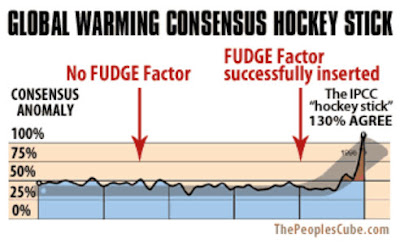 It's official: the consensus for Man-made Climate Change is now over-unanimous. The results from a recent poll conducted by the Mann-Hansen Group strongly support Mann-made Climate Change theories by 130% for to -50% against. This unprecedented result was obtained by counting a 'no' vote as a negative response which is added by subtracting. This also generates a positive feedback raising the pro vote beyond the 100% level.
Explained a Mann-Hansen expert, "Yes, the numbers don't exactly add up to 100, a discrepancy we attribute to the carbon offset, as the poll takers, being life forms, have quite a bit of carbon in them. In any case, the whole thing has man's carbon fingerprints all over it. Our computer models can rectify this using the customary Flexible Up and Down Guess Estimate, or FUDGE factor. This might seem unnatural, but Man-made Climate Change is unnatural, so the consensus may as well be, too. You have to fight fire with fire."
He continued, "The Precautionary Principle would seem to imply we act with caution, but as the consensus has passed the 100% tipping point, it no longer applies. This invokes the Post-Cautionary Principle meaning radical, precipitous action is now required. Which is what we've been saying all along, only now we've produced some overwhelming numbers to back us up."
Other Headlines from the Future:
Also recommended: Al Gore Is Right: Listen To Us Experts — and Show Us the Money!