The NASA AIRS satellite is providing data on localized global CO2 levels, as shown in the map below for July 2009: 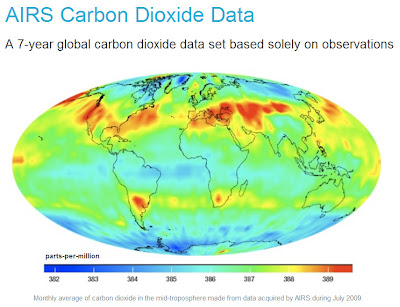 The map shows CO2 "hot spot" levels of 389 ppm along the coastal US and southern Europe but also hot spots in sparsely populated areas such as the middle of the Pacific Ocean, the Bering Strait, and Mongolia. But the most interesting aspect is that the difference between the CO2 concentration at the hot spots and the global mean is only 3-4 ppm, a 1% difference in concentration. Using the IPCC Climate Computer shows that this difference in CO2 levels is predicted to result in a temperature change of 0.04°C assuming the imaginary IPCC positive feedbacks, or 0.01°C not assuming the imaginary feedbacks.
°C and thereby lead to increased health effects from pollution. The press release goes on to say that CO2 should be taxed more when it is produced in cities vs. in rural areas because lowly CO2 is again being blamed as the cause of the Urban Heat Island effect. Once again, the harmless, essential, non-polluting trace gas CO2 is the wrongly convicted evil-doer because of junk science and ease of taxation.
This inconvenient truth didn't stop Stanford University from issuing a sensationalist press release Urban CO2 domes increase deaths, poke hole in cap-and-trade proposal by the scientist who "found that domes of increased carbon dioxide concentrations – discovered to form above cities more than a decade ago – cause local temperature increases that in turn increase the amounts of local air pollutants, raising concentrations of health-damaging ground-level ozone, as well as particles in urban air." It is hard to fathom how a difference in temperature of 0.01 - 0.04°C is going to do all of these things and increase deaths. What is easy to believe is that the Urban Heat Effect from e.g. asphalt and use of energy in urban areas can significantly increase urban temperatures up to 8

UPDATE at co2science.org EPA funded the study and got their monies worth