In this 2007 paper, James Hansen, head of GISS and climate-alarmist-in-chief, recounted when he was called as a witness in a lawsuit, and "boxed-in" by an attorney who asked him to name just one other scientist who agreed with his assertion that sea levels would rise more than 1 meter this century, stating "I could not, instantly." 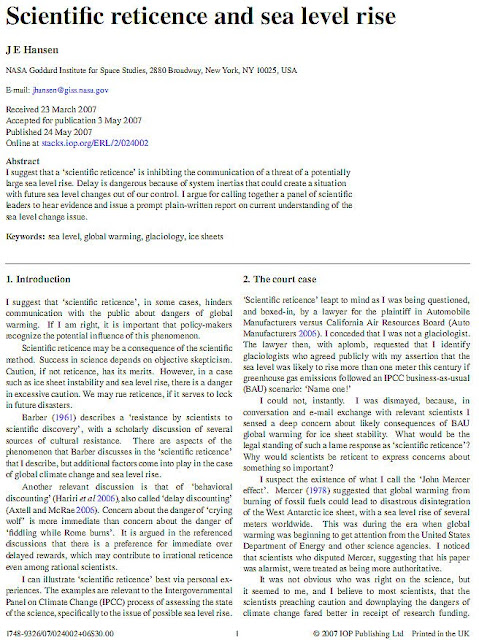 Even though Hansen couldn't think of a single scientist who agreed with him on this settled scientific consensus, he continues on with his usual political calls to action [note to Hansen: taxpayer funded scientists are supposed to publish scientific papers for the literature, not biased political calls to action] and concludes that with all sorts of imaginary additional positive feedbacks that the climate will soon spin out of control and produce a rise in sea level of 5 meters this century (UPDATE: Hansen upped estimate to 75 meters in 2009 editorial). Apparently he doesn't look at the NASA data from JASON which has shown a decrease in the rate of sea level rise to 1.5mm/yr (0.15m/century) over the past 6 years, less than half of the prior rate (sea level has been slowly rising since the last ice age).  He should also look at the ARGO+GRACE data showing a decrease in sea levels 2004-2009. He should also consider that the NASA satellite data shows that negative feedbacks dominate climate, all the while CO2 continues its steady (linear) rise that will take 234 years to double at the current rate.  As a physicist, he should understand that the sum of positive feedbacks has to equal the sum of negative feedbacks, otherwise the earth violates the equilibrium demanded by the 2nd law of thermodynamics and becomes a perpetual heat engine. He also doesn't acknowledge the historical records of natural Greenland ice sheet melt during the Medieval Warming Period, which allowed the Vikings to colonize and cultivate Greenland, their agricultural land now covered again by a giant ice sheet...and so on.
In this paper, Hansen states that GRACE satellite gravitometer data shows that both Greenland and Antarctica are losing ice mass at substantial rates (and doesn't mention any other parts of the globe). Here's what the GRACE data (using all data available online 2003-2009, expressed as "equivalent water thickness") actually shows for the entire globe and selected trend plots for areas with the most change:
GRACE Canada Trend: 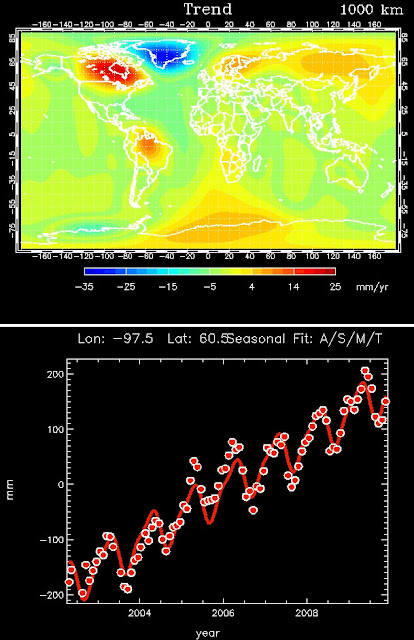 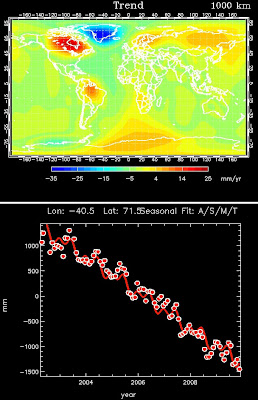 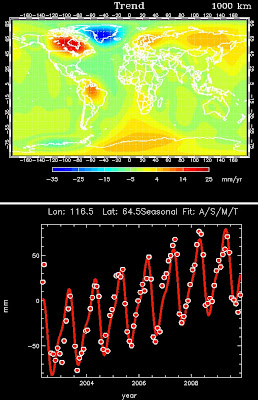 Although the GRACE data browser for some reason will not produce any trend plots for Antarctica, the color plot above tells the story: almost half of Antarctica (an area far larger in size than all of Greenland)  is increasing in mass at a similar rate to the huge Siberian region and the rest of Antarctica has little change. The Himalayas located between India & China also show no significant change (contrary to IPCC AR4 claims). Looking at the global picture in the color plot above, we have one small portion- Greenland -loosing mass at a significant rate (likely due to changes in ocean oscillations and arctic weather patterns) which appears to be offset by increases in ice mass elsewhere. I fail to find any evidence of Hansen's doomsday scenario in the GRACE data, temperature data, or sea level data.

Note 1: various methods come to widely divergent conclusions on the status of the Greenland ice sheet, some showing increasing thickness, others decreasing. For a discussion of the available literature, see here.
Note2: Hansen is the original climate alarmist, who assumed that most of 20th century climate change could not be natural and must be due to CO2 produced by man (man-made CO2 is only 3-4% of total CO2 emissions).  See Lindzen's lecture on why this theory makes the theory of intelligent design seem rigorous by comparison.  Hansen first came into the limelight when he warned congress in the 1970's that we were entering an ice age. He holds extremist political and eco-terrorist views and recently highly endorsed a book which concludes, ""The only way to prevent global ecological collapse and thus ensure the survival of humanity is to rid the world of Industrial Civilization". Here he is 99% certain of his fiction way back in 1988:

7/4/88: Testifying before a congressional committee last week, James Hansen, an atmospheric scientist who heads NASA's Goddard Institute, riveted Senators with the news that the greenhouse effect has already begun. During the first five months of 1988, he said, average worldwide temperatures were the highest in the 130 years that records have been kept. Moreover, Hansen continued, he is 99% certain that the higher temperatures are not just a natural phenomenon but the result of a buildup of carbon dioxide (CO2) and other gases from man- made sources, mainly pollution from power plants and automobiles. Said Hansen: "It is time to stop waffling and say that the evidence is pretty strong that the greenhouse effect is here."
His findings were based on monthly readings at 2,000 meteorological stations around the world. The data showed that temperatures over the past century had increased in winter more than in summer, and that areas in high latitudes like Paris and New York had warmed up more than regions near the equator. That was consistent with computer models. "These are all expected signatures of the greenhouse effect," Hansen said. Still, he and other leading scientists warned against concluding that the greenhouse effect is directly responsible for the heat wave that is parching areas of the U.S. "Why didn't we have a drought last summer?" he asks. "You can only say that the probability of drought is increased by the greenhouse effect."

Related: Hansen is pleased Phil Jones is fraudulently corrupting the CRU temperature database by preferring temperatures measured at airports and in cities instead of rural data.

Related: Hansen is a fear-mongering propagandist
Posted by MS at 6:30 PM